Director General (DG) of Nigerian Institute of Medical Research (NIMR), Yaba Lagos, Professor Innocent Achanya Otoba Ujah, has added another feather to his long list of award in recognition of his valuable contributions to improve medical research and services as he received the Association of Professional Bodies of Nigeria (APBN) ‘Health and Medical Awards’ on Thursday. Professor Ujah was among the four persons who were honoured by APBN during the association’s 29th Annual General Assembly (AGA) awards held at Golden Gate Restaurant, Ikoyi. 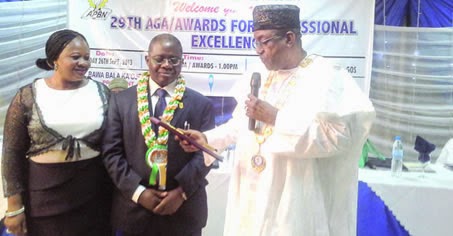 Prof. Ujah is a recipient of many awards including Oyo State National Youth Service Corps (NYSC) Chairman’s award in 1980; life membership award; and National Association of Resident Doctors of Nigeria (NARD) in 1987. In 1993 he received the Study Fellowship sponsored by Swedish agency for International and Technical Economic Cooperation, at the University of Uppsala Sweden, to study a diploma course on international maternal health. Most recently, Ujah received the Life Achievement Award by Lagos sector of Society of Gynaecology and Obstetrics of Nigeria (SOGON) and Honours Award by Faculty of Medicine Sciences, for contributing to the building of College of Medical Sciences, University of Jos, while serving as a Dean of Faculty. Professor Ujah joined the services of the University of Jos and Jos University Teaching Hospital in 1988 as lecturer/consultant and was promoted Professor of obstetrics & gynaecology in 2001.

Born on November 6, 1954 at Aidogodo-Okpoga in Okpokwu , Local Government Area (LGA) Benue State. He had his early education in Aidogodo Okpoga and Otukpo all in Benue state. He had secondary education at Government Secondary School, Katsina-Ala between January 1967 and December 1971, where he obtained his West African School Certificate (WASC). He attended Government College, Keffi for his Higher School Certificate (HSC) education, between, January 1972 and June 1973. Professor Ujah graduated from Ahmadu Bello University (ABU), Zaria in June 1978 with an MBBS degree. He is a fellow of Medical College of Obstetrics & Gynaecology (FMCOG) of the National Postgraduate Medical College of Nigeria by examination, Fellow of International College of Surgeons (FICS) and Royal Society of Medicine of England (FRSMed).

Professor Innocent Ujah is a specialist gynaecologist, endocrinologist and endocrine infertility. He also holds a Diploma in International maternal health care from University of Uppsala, Sweden. Professor Ujah has published over 70 scholarly articles in reputable national and international peer-reviewed journals, in addition to over 100 conference papers, abstracts and has delivered many lectures. He has attended many national and international conferences and presented a number of quality scientific papers. Others who received the awards are: Hajia Maryam Ladi Ibrahim, who received the ‘Financial Awards’ and Mr. Nweke O. Umezuruike who received the ‘Environment/Engineering/Construction  Awards’ and Adm. Josiah A. Okoronkwo, who was honoured with the ‘Management/Communication Awards.’

This story was published in Newswatch Times on September 28,  2013.
http://www.mynewswatchtimesng.com/nimr-dg-receives-another-award/
Posted by Chioma Umeha at 17:58