…Must work at community level to control disease

Recently, the International Center for Journalists (ICFJ) and Malaria No More programme  selected some journalists to  participate in “Covering the Fight to Eradicate Malaria: A Fellowship for U.S. and International Journalists, ” in Thailand and Cambodia.  Among the nine journalists who were selected, eight of them that participated to tour   the two countries returned enthused with the on-going multi-level malaria research and development to ensure innovation and fight drug-resistance parasite. The journey took them to key research centres, clinics in both countries and as far asThai-Myanmar border to visit the Shoklo Malaria Research Unit (SMRU) clinic. CHIOMA UMEHA, (HEALTH EDITOR, NEWSWATCH TIMES), who represented African journalists in the premier fellowship, reports that African countries, especially Nigeria is behind the global race to eradicate malaria in view of on-going research in the two countries.

Many know that Thailand is a dominant exporter of rice in the world. However, only few may be privy to the Malaria Control Programme going on there. Also, not many are aware that the country is at the centre of global efforts to prevent the loss of the best anti-malaria drug currently available which is Artemisinin-based Combination Therapy (ACT).

Similarly, many may not know   about the effort of the Asian country in containing artemisinin resistance along the Thai-Cambodia and Thai-Myanmar borders.

But, eight journalists   who were  sponsored   by  the International Center for Journalists(ICFJ) and Malaria No More programme  to participate in “Covering the Fight to Eradicate Malaria: A Fellowship for U.S. and International Journalists,” in Cambodia and Thailand were privileged to  obtain first-hand experience of the malaria research activities in these areas. The Journalists, who just returned from their visits to the two countries, said they discovered what could pass on as a ‘model’ in malaria research and development, to provide innovation and combat drug resistance.

From connecting with top researchers, government officials and small business leaders to studying cross-border migration and disease control issues, the six-day fellowship in Thailand and Cambodia showed a broader context of the barriers to malaria eradication and the threat of drug-resistant malaria.

What they saw confirmed that there are many missing gaps which account for the challenge in malaria control, especially in Africa countries such as Nigeria that   is endemic of the disease. 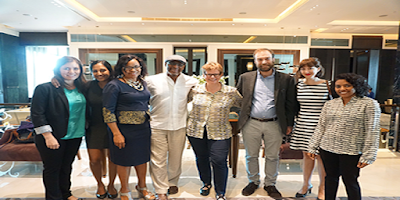 Malaria is a preventable and curable disease, yet in 2013, the World Health Organization (WHO) estimated that the disease killed more than 580,000 people.

Nearly half the world’s population is at risk of malaria. Most deaths occur among children under the age of five living in sub-Saharan Africa.

Lack of access to quality artemisinin-based combination therapy (ACT) to treat malaria is increasing around the world, but its misuse, together with the use of cheaper, ineffective drugs can lead to dangerous drug resistance. Spread of resistance could jeopardize the efficacy of ACT, which is the best treatment currently available.

Also, misdiagnosis of fever can lead to misuse of ACT, which contributes to increasing drug resistance, as well as avoidable deaths from pneumonia and diarrheal disease. Fever case management is thus becoming increasingly important.

Artemisinin is one of the most effective drugs against malaria; its use in combination with other therapies has led to a revolution in malaria control globally.

Following sustained support from the Wellcome Trust, the programme has grown considerably in reach and capability, with the creation of the Shoklo Malaria Research Unit (SMRU) on the Thai-Myanmar border in 1986.

Commenting on the extent of research advancement at SMRU, Dondorp said: “We have conducted over 50 clinical trials involving over 15,000 patients making SMRU the world largest single centre by the number of patients recruited; pioneered the development of artemisinin combination therapies (ACTs) and studied the next generation of antimalarials.

Demas further explained that the laboratory is presently collaborating with entomologists to identify the main vectors on the Thai-Myanmar border as part of the malaria elimination studies.

According to him, the malaria in-vitro laboratory has successfully adapted the culture systems to the flow cytometry, the microscopy laboratory and the study of new diagnostic tools.

Similarly, the Director of the Malaria Elimination Programme added: “The microbiology laboratory provides a range of tests for diagnostic, surveillance and research purposes”.

The various tests, he said include: Microscopy, culture, antibiotic susceptibility testing, and immunological based assays and molecular assays.

Specifically, Gilles said that the lab carries out influenza surveillance (funded by the Centre for Disease and Control (CDC), Dengue diagnostics and antenatal urine screening.

“More recently, molecular diagnostics for tuberculosis diagnosis has been implemented that also enables rapid detection of rifampicin resistance,” he added.

Briefing journalists, Prof Francois Nosten, Director of the SMRU, said that the unit has performed many treatment trials and pharmacokinetics studies of antimalarials in pregnancies which were published in literature.

Nosten who also said that the unit has studied large numbers of isolates of P. falciparum and P. vivaxinvitro., described in details the epidemiology of malaria in this area.

He gave a quick historical background of drug development which began with Chloroquine in the late 50s. He said Fansidar was developed to replace Chloriquine before the introduction of Mefloquinein 1985. Following rising cases of malaria and failure in treatment with available drugs, Artesunate (INN), part of the Artemisinin group of drugs was developed and its use began in 1991.

The SMRU Director noted that there was an official declaration of Artemisinin-based combination therapy (ACTs) use across the world in 2006, adding that this led to a global shortfall of malaria, for example in Greater Mekong Sub region (GMS) Thailand, where few cases were recorded.

Lamenting, he said malaria parasite is becoming increasingly resistant to ACTs and stressed: “Our concern is that the story is repeating itself; eight years, nothing has been done. While this is going on in Cambodia, it is knocking on the door of India; it will progress to Africa and it will result in millions of death.”

Still bemoaning, Nosten said: “We have failed to communicate this global emergency to the world; we failed to raise the concern. If we show people dying of ‘Ebola,’ people are scared; with malaria, this is not so, people are not in the clinic, those parasites are hiding.”

Raising alarm over a re-emergence, SMRU Director said: “We are in a race against the parasite. Those parasites are evolving and make themselves resistant, one day, they will re-emerge. If that happens, that will be catastrophic.”

Reacting to the lessons which Nigeria can derive from the research efforts in the two Asian countries, he regretted that Africa is behind in the race against malaria parasites. He also recommended for a study of next generation drugs, while urging Nigeria to start working at the community level to achieve malaria control, insisting that nothing is going to come out of the Ministry of Health.

He maintained: “We have to start working with Civil Society Organisations (CSOs) and warned; “Don’t wait for government.” According to him, 90 per cent international assistance evaporates following over-dependence on government to champion malaria control cause, especially in African countries like Nigeria.

To forestall what he declared as a public health emergency, Director of the SMRU, stressed: “We must eliminate (falciparum) malaria quickly before it becomes untreatable. This implies also attacking the asymptomatic parasite reservoir.  We urgently need new antimalarial drugs; till then, we will have to be creative with what we have: Targeting ACT drugs (TACT).

This story was published in Newswatch Times on November 26, 2015.
http://www.mynewswatchtimesng.com/global-malaria-control-nigeria-other-african-countries-get-wake-up-call/