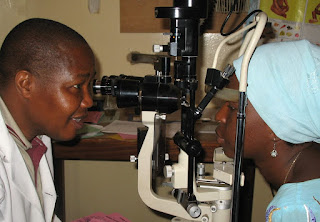 Ogun State Health Commissioner Dr. Babtunde Ipaye has said residents will benefit from a free eye surgery programme and a gift of recommended glasses to those with
sight problems.

Ipaye spoke in Sagamu while flagging-off a week-long programme organised by “The Collectives”, a community-based project providing free eye screening and surgery.
The Commissioner said the next round of the programme would enable residents get surgical interventions for their eye problems, such as cataract and glaucoma.
The Ogun state Ministry of Health boss said over 20,000 residents benefits from social health insurance scheme, called Araya, where the government takes care of the less privileged.
According to him, about 24 health facilities both private and public were already enlisted, treating patients which the government paying the premium every month.
He noted that basic eye care was also part of the “Araya” Scheme, where the state government put together all the essential primary health care component or elements and basic eye care, including issuance of recommended glasses to those who in dare need of it.
He said that there was a bill before the State House of Assembly to have a law that would make health insurance available for all the citizens of the State, where members of the public would contribute a token and government would subsidise and people would be enlisted in the social health insurance scheme called “Araya” like it’s done in advanced country.
Ipaye appreciated the members of “The Collectives” for their laudable initiative, especially in restoring of the people’s sight both through the provision of glasses and surgical operation, admonishing other non-governmantal to take a cue from them.
Dr. Oladapo Awode, Consultant Ophthalmologist, charged the government at all levels to make issue of blindness in the country priority and matter of policy in tackling it through the provision of available, accessible and affordable eye care service at primary health care, secondary and tertiary care services.
Noting that globally 38 million people being blind, half of them were from cataract and about 8 million people blind from glaucoma which was the worst of all, he said blindness from glaucoma was irreversible, while blindness from cataract was reversible.
Posted by Chioma Umeha at 21:23