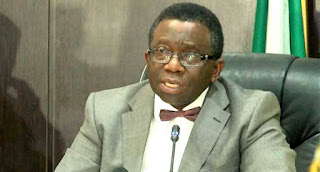 By Chioma Umeha
The Minister of Health, Prof. Isaac Adewole has received the report on Restructuring Residency Training Progamme from the Ministerial Committee inaugurated by the Federal Ministry of Health in May this year to appraise the previous committee’s reports on the Residency Training Programme and to recommend sustainable uniform Residency Training Programme in Nigeria.
The report was presented by the Chairman of the Committee, Prof. Wole Atoyebi, Registrar, National Post –Graduate Medical Collage of Nigeria.
Receiving the report, the Minister of Health appreciated the members of the committee for working tirelessly to produce a document that would serve as panacea to the residency training challenges in the health sector.
The Minister assured that the Ministry of Health would review the recommendations of the committee and take appropriate decision.
“We will make copies and circulate it so that those who want to make comments can put it across, I can assure you that by next week, we would take decision on it, it is not something that would waste away, it will also not gather dust, we are under pressure, but we also have responsibility for the future of the health system.
“The trainees are quite critical to the delivery of healthcare, so we can’t do away with them,” he said.
In his remark, the Chairman of the Committee, Prof. Prof. Wole Atoyebi, said that during the course of their assignment, they had reviewed three different reports on Residency Training Programme, adding that all stakeholders were represented during discussions and memoranda were also obtained from various bodies before putting down the report.
He said: “We found out that in the past ten years, this is the fourth report  on the Residency Training Programme . The first was in 2006, second was in 20011, third was in 2014 and this is the fourth in 2016.”
Prof.   Atoyebi said that some of the recommendations of the previous committees that were found to be very useful and inevitable and have not been effectively implemented were still included in the present report with the hope that they would  be implemented.
He however thanked the Minister for giving them the opportunity to serve on the Committee.