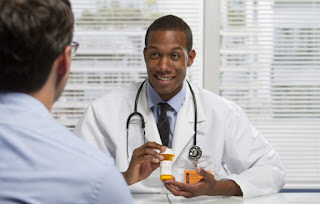 By Chioma Umeha
Doctors and pharmacists in the country under the aegis of the Nigerian Medical Association (NMA) and the Pharmaceutical Society of Nigeria (PSN) respectively, have reaffirmed their commitment to bury their differences to usher a new dawn in healthcare where the interest of patients will be paramount.
The goal according to them is to boost the country’s healthcare delivery system by offering quality and effective healthcare services to patients   through a harmonious relationship and teamwork.
To this effect, the leadership of the two professional bodies, said it had set up some committees on inter- professional collaboration to ensure the implementation of the decision among healthcare professionals.
The committees will ensure a smooth working relationship among all the various professional groups in the health sector, including nurses, laboratory scientists, among others.
Disclosing this during an interactive session in Lagos recently, Dr. Mike Ogirima, President of NMA and Pharm. Ahmed Yakasai, his PSN’s counterpart, said the essence of the committees, was to instill collaboration, communication, cooperation and teamwork in the health sector in the interest of patients.
Ogirima explained during the interactive session: “ We are here to tell the whole world that the pharmacists and doctors are one. We all receive the same lecture in pharmacology and the way the world is going, we should not have a dichotomy.”
According to him, “The welfare of the patient is our uppermost concern”, adding that they have resolved to work together as a team like their counterparts in the Diaspora.
It would be recalled that over the years, the Nigerian health sector had witnessed unhealthy rivalries, including battle for supremacy among the various professional groups in the sector. Now, the groups are embracing better relationships to put an end to any rifts among them.
The NMA President stated that the interactive session was a follow-up to the symposium on inter professional collaboration organised in Lagos, recently by the Nigeria Academy of Pharmacy (NAPharm), in collaboration with PSN.
In his remarks, the PSN president said: “In abroad, doctors and pharmacists work in harmony. They organise and share conferences together. We will be happy to have such a relationship here.”
Yakasai also said: “Whatever we are doing, the centre should be the patient. And for the patient to enjoy quality healthcare delivery there must be team work and mutual respect for one another.”
He explained that the committee on inter professional collaboration is headed by the Publisher of PharmaNews and Vice President of NAP, Sir Ifeanyi Atueyi.
Yakasai, president, PSN, expressed his happiness with the interactive session saying it is a further proof that the cordial relationship among healthcare professionals that the doctors and pharmacists saw in Las Vegas, USA, last year, can be replicated in the country.
He commended the NMA president for his commitment to enhancing the spirit of teamwork among healthcare professionals, noting that the NMA boss since his assumption of office has consistently demonstrated his dedication to ensuring there is mutual respect for all members of the health team making invaluable contributions to healthcare delivery in the country.
Pharm. Yakasai stated further that the inter-professional committee from both PSN and NMA will collaborate to further deepen the cordial relationship now existing between the two professionals in the country.