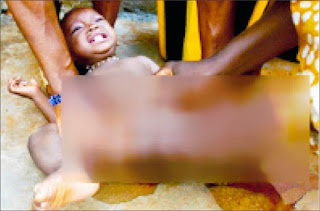 As Nigeria joins in the celebration of International Day for Zero Tolerance Against Female Genital Mutilation (FGM) today, CHIOMA UMEHA writes that the country which shares 25 per cent of the burden of FGM which occurs in Africa is home to millions of girls and women who have undergone FGM, a dehumanising practice which endangers their life.
Like every young lady who is ripe for marriage, Chinwe Ude was happy to tie the nuptial knots at the age of 24. But, her joy was cut short by dyspareunia – pain during sexual intercourse. The diagnosis of Chinwe’s condition was linked to FGM.
Also, Funmi Adigun, 23, suddenly began to experience vagina itching, painful urination and menstrual problems, shortly after marriage. She was further diagnosed with genital tissue and reproductive tract damage as a result of FGM which was performed on her at the age of five.
For Miriam Abubakar, her joy knew no bounds when she got married at the age of 33. Hardly had she completed her honeymoon when she started having vagina itching and painful urination.  Next, she began to experience menstrual problems. Miriam was later diagnosed of chronic genital infections and cyst.
Subsequently, her new marriage was threatened. Miriam’s joy when she later became pregnant was short-lived as she was a victim of prolonged labour, post-partum haemorrhage and still birth.
Her doctor had performed surgery on her to correct the damage done to her female genitalia after she was infibulated as a child before the pregnancy occurred. Her genitalia had to be opened for the passage of penis and baby.
Also, her female genitalia were further cut open to allow passage of foetal head while she remained in serious pains.
Her parents had ignorantly allowed her genitals to be cut when she was age one, because they reportedly wanted to prevent her from being promiscuous. They wanted her virginity to be preserved so that her bride price would be huge.
“I married my heartthrob after searching patiently for a husband; today I cannot enjoy my marriage. I blame my parents for everything. If my parents had not insisted on tradition, my marriage would not have crashed,” Miriam tearfully told DAILY INDEPENDENT.
Chinwe, Funmi and Miriam represent millions of girls who go through torture under the knives of genital mutilators worldwide.
What the three women underwent was Type 3 FGM, which is called Infibulation. That is the removal of all external genitalia, which leave a small opening for blood and urine.
This procedure is usually performed by elderly women using scissors, razor blade or knives under unsanitary conditions and no anaesthetics used.
The World Health Organisation (WHO) reports that Female genital mutilation includes all procedures which involve partial or total removal of the external female genitalia or injury to the female genital organs, whether for cultural or any other non-therapeutic reasons.