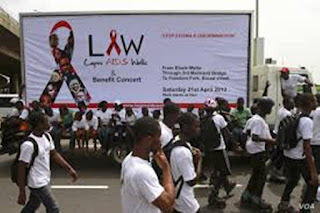 Consummating marriage to a royal father always come with pride, pomp and celebration, but not so for Bola Olagunji.

Barely after five years of tying the nuptial knots with a royal father, had the curtain of bliss fallen, no thanks to Human Immuno-Deficiency Virus (HIV).

Bola was suddenly found to be HIV positive. Prior to this, she enjoyed her life and position as the most favourite wife, being the youngest, though third and last wife of a Lagos socialite. Though a trained accountant, she also lived a very comfortable life despite that she stopped working at the request of her husband.
However, all the happiness had gone. This is because Bola dumped her marriage as soon as she tested positive to HIV in 2008. Today, the former Princess is forced to live in denial of her status due to fear of stigma and discrimination. Here is the story of Bola who recently spoke to our reporters:

“I have always been healthy and strong, my only serious problem was infertility. I couldn’t get pregnant. I married into a wealthy polygamous family and was the third wife of a caring and comfortable man.

I had tried all I could but did not conceive. Years after marriage, I was still searching for a child. My husband had seven children from his two other wives, but I was the youngest.

I’m a trained accountant, but my husband did not allow me to work. He provided for me and gave me all I wanted, except a child, of course. The day I got to know that I was HIV positive, it was quite unpalatable. It all began in 2008.

We had been married for about five years at that time. I had been falling in and out of illness and hoping it was pregnancy.
I was transferred from one hospital to another. The illness got so bad at a particular time

I was admitted into a world-class private hospital in Victoria Island, Lagos, for about two months, but didn’t really get better before I was eventually referred.
I was given a sealed letter and then transferred to one of the General Hospitals in Lagos, with stern instructions not to open the letter.

At the General Hospital, I handed the letter to the health official that attended to me.
He opened the letter, read it, stared at me and then said I should go for a particular screening test in another part of the hospital. I went and did the test. The result of that test was also not given to me, but later I was told by that doctor that I was HIV positive.

I felt bad at first, but later asked my husband if he had any idea of the content of the letter that I had taken to the hospital. He admitted that he did, but said that it was not the end of my life.

I didn’t initially understand what it meant to be HIV positive, but over time the harsh reality dawned on me. I came to terms with the fact that I had a very serious problem. The development affected me a lot and I felt quite bad.

It was a difficult burden for me to handle and I broke down completely. However, my husband was very supportive and really I owe him thanks that I coped. He encouraged me a lot and vowed never to leave me.

He kept the news of my status to himself. No one including any of his other wives knew I had HIV. Others who knew about my HIV status were my mother and sisters. I told them myself.

I started treatment and was placed on Antiretroviral (ARV) drugs; and my health gradually improved, but I was still puzzled, how did I contract HIV? I kept asking myself this question. I began to research about HIV/AIDS. I went on the internet and read about it. I became aware that the most common mode of HIV transmission is through sexual intercourse.

I was in my mid 30’s; I was not sexually adventurous before I got married. Although, I had a few boyfriends while in school and afterwards, I never had sex with any of them.
I was a virgin until I met and married my husband. He was my first and only sex partner. I had never gone for surgery or had a blood transfusion or been at risk of any of the other modes of HIV transmission.

I further realised that my husband had never disclosed his HIV status. He had never even talked about it. He probably didn’t know his status, yet he had two other wives, so it was quite logical to assume the HIV infection must have come from him or one of his other wives.

One day, I confronted him and demanded that he get tested too. From my research, I had gathered that when one person tests HIV positive the sexual partner(s) must be tested too. But my husband refused to get tested.

I begged him to go for the test and also inform his other wives to get tested, but he got angry and said he was okay and did not need any test. He warned me not to talk to his other wives about the matter. But, I was really worried.

We wanted to have our own children. So, I was desperately trying to get pregnant and was taking fertility medication that required us to have sex regularly, but I knew it was not healthy to do that since he had other wives. I was avoiding transmitting the infection to them.

I told him the dangers of continuing with unprotected sex, while his HIV status is not established and also sleeping with his other wives as well as how the risk of transmission among us was high. But, he was not moved and we failed to agree on the issue.

He stubbornly refused to get tested and also declined to let the other wives get tested or to know their status.
Gradually, we started avoiding each other and our sex life suffered. One night, he came into my room while I was sleeping and began making sexual overtures.

It had been a while since we made love, and since I was in the mood and he was my husband, I gave in. But during the act, I discovered he was wearing a condom. I was so infuriated I didn’t know when I violently pushed him off.

Do you want to kill me? Why are you punishing me like this? I want to have a child! I was shouting without realising it. He just lay on the bed staring at me in shock. There was a soft tap on the door and I heard the voice of the senior wife asking if all was well.

My husband slowly got up and without uttering a word left the room. I was in a dilemma. How would I get pregnant if we didn’t have sex or if he used a condom every time? I was desperate to conceive, yet I did not want to be responsible for transmitting HIV to the other wives.

I was confused and almost going out of my mind. Many times I was tempted to spill the whole thing to the senior wife. She is few years older than I am and a mother of three daughters.

She was quite nice and understanding and like a big sister to me. I often confided in her about personal issues, including my infertility problems, but I was unsure how she would react to the development on ground.

I think my husband suspected my intentions because early one morning came into my room and apologised for his behaviour. He promised to disclose to the other wives and also go for the screening and appealed to me to give him a little time to address the issue. I agreed and waited, but he didn’t keep his promise.
We continued like this for months until one day, I just got fed up.

So I confronted him point blank that I was quitting the marriage because he was not ready to do the needful. He looked down on the floor as I threw my bombshell.
That day, I packed my belongings and left his house. If his other wives knew why I was leaving, they didn’t show it. They didn’t try to stop me. I saw my husband few times afterwards but never went back to his house. That was how our marriage ended.

About a couple of years after we broke up, I heard that he fell ill and had passed away. Before he died, I had left Lagos for Ondo State where I received the message of his death. The cause was not disclosed. Could it have been related to HIV/AIDS? From what I knew about him, it’s a possibility.

I believe that my late husband did not disclose his status until he died. The senior wives need to know how to take care of themselves. I am thinking of a way to alert them so that they also get tested and take care of themselves. This is perhaps the best time to tell the whole story. I have called the senior wife and her junior and plan to visit them soon to tell them everything about this story.

Already, I have lost a lot of friends because they suspect am HIV positive. I’m currently staying with my junior sister who knows about my status, but I’m planning to return to relocate to Lagos.

Right now, I’m still hoping to have a child of my own. I’m now in my 40s and wish I could afford Invitro- fertilisation (IVF) but, it would be nice to get married again. The man that would marry me would know everything about me. I would let him know that I am HIV positive.

I’m still hoping to get married again, but men approaching me always leave when I tell them I am HIV positive. Of course they demand sex first, and if I insist they go for their HIV test they begin to wonder. But, I insist that they must know and disclose their HIV status before we can date. The moment I make this demand and reveal my status, my suitors always leave me.