Toilets are still out of reach for more than one-third of the global population, with devastating consequences to the health and development of children, UNICEF said on Tuesday, during the World Toilet Day. However, the key to bridging the gap lies within communities themselves, the organization emphasized. Since 1990 almost 1.9 billion people gained access to improved sanitation, but in 2011 the total without access was still 36 per cent of the global population, or approximately 2.5 billion people.

“Access to toilets remains the unmentionable, shameful secret for even some very prosperous countries,” said Sanjay Wijesekera, the global head of UNICEF’s Water, Sanitation and Hygiene (WASH) programmes. “But its invisibility doesn’t make it harmless; in fact it is quite the reverse. Lack of access to toilets is quite literally killing children, making adults sick, and slowing progress – day after day after day.” Toilets are still out of reach for more than one-third of the global population, with devastating consequences to the health and development of children. In Nigeria, over 100 million people do not have access to improved toilet facilities out of which over 45 million defecate in the open. Lack of toilets pose a great danger to public health and general well-being as evidenced during the recent cholera outbreak in several parts of the country. However, the key to bridging the gap lies within communities themselves. Since 1990 almost 1.9 billion people gained access to improved sanitation globally, of which Nigeria accounted for approximately 13 million. In 2011 the total number of people without access stood at approximately 2.5 billion people.

According to figures released by UNICEF earlier this year, lack of access to safe water, sanitation and hygiene is a leading cause of deaths from diarrhoea in children under five, amounting to approximately 1,600 children dying each day globally. In Nigeria, about 194,000 children under five years die annually due to diarrhoea and in addition, respiratory infections kill another 240,000. Recent report from Federal Ministry of Health revealed that 2,771 cases of cholera with 124 deaths have been recorded in many parts of the country so far. All these are largely preventable with improvements in water, sanitation and hygiene. UNICEF’s has spearheaded a social change movement that that has led more than 25 million people to end the practice of open defecation and now use toilets. The Community Approaches to Total Sanitation (CATS) programme, encourages communities to take the lead and identify their own measures to end open defecation, and has been achieving results at scale. 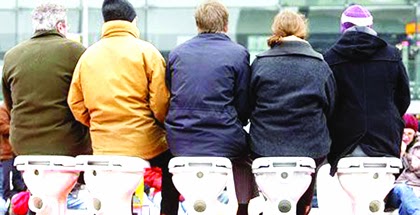 At the last count, over 50 countries have implemented CATS and many governments have mainstreamed a similar approach into their national policy. But despite this success, Wijesekera said more still needs to be done, and urgently, by countries, communities and individuals, principally to bring the taboo subject of toilets and open defecation from the shadows, discuss it frankly, and agree on tackling the problem. The CATS approach works precisely because it depends on people taking their own decisions, and coming up with their own solutions. As more governments and communities apply the method to eliminate open defecation and scale up access to toilets, many more people stand to benefit, especially from a reduction in WASH related diseases. Also, through its on-going global “No access” campaign at its website, UNICEF is promoting major pushes around the world on World Toilet Day, to bring awareness to the dangers of open defecation and the problem of lack of access to improved sanitation. In India, where in 2011 approximately 65 per cent of the population did not have access to improved sanitation, and over 620 million people defecated in the open.

This even as  UNICEF India is rolling out Poo2loo, an on-line campaign addressing the issue of open defecation in the country. In Mali, on World Toilet Day, UNICEF is launching a Sanitation Marketing Project in partnership with PSI-Mali and the National Directorate of Sanitation. In Eritrea, there will be celebrations of certifications of Open Defecation Free communities throughout the country. “Every action which spurs people to change their way of dealing with defecation brings us closer towards the goal of sanitation for all,” said Wijesekera. “It is not easy, but it is certainly doable, and moreover, it is absolutely indispensable if we are expecting to live healthy lives in the 21st century.” World Toilet Day, long observed on November 19 was made an official United Nations Day by a UN General Assembly resolution in 2013.

This story was published in Newswatch Times on November 21,  2013.
http://www.mynewswatchtimesng.com/grassroots-advocacy-key-end-worlds-toilet-problem-unicef/
Posted by Chioma Umeha at 01:52