Scientists have discovered that de-activation of certain nerves in the neck can cure high blood pressure. An agency report Tuesday claimed that scientists experimented with rats and found that de-activating certain nerves in the neck can effectively treat high blood pressure – a discovery that could be an advance in tackling one of the world’s biggest silent killers.

However, researchers at Britain’s Bristol University found that in rats with high blood pressure, when they removed nerve links between the brain and the carotid body – a nodule about the size of a grain of rice on the side of each carotid artery – the animals’ blood pressure fell and remained low. The researchers’ results, published in the journal: Nature Communications, have already led the team on to conduct a small human trial of the technique, with results expected at the end of this year. Hypertension, or high blood pressure, is referred to by the World Health Organization (WHO) as one of the world’s biggest silent killers because most people who have it cannot feel or see it. It affects around one in three people worldwide and can cause stroke, heart attacks and kidney failure. 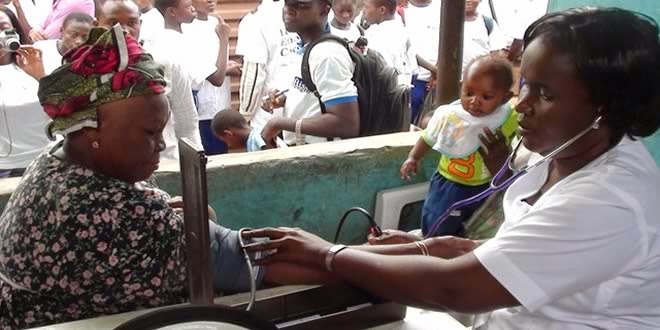 After diagnosis, treatment of high blood pressure needs to be life-long and many patients are able to manage their condition with anti-hypertension drugs. But experts say that for around one in 50 of them, medication does not help. The Nigerian Medical Association (NMA) recently said that a staggering fifty- six million Nigerian people suffer from high blood pressure (HBP). This is based on the statistics carried out by World Health Organization (WHO) which said that one out of every three persons around the globe has hypertension, a situation which the world body said is deadly to the survival of mankind.

This figure is ten times higher than what was obtained in the last 23 years. In July, 1993, the then health secretary, Dr. Christopher Okogie through the Federal Ministry of Health gave the report that 5.5 million Nigerians are already hypertensive. This is even as experts have decried outdated statistics on hypertension. For instance, Emeritus Professor of Medicine, University of Ibadan, Oyo State, Oladipo Akinkugbe, recently, condemned the fact that the last study on hypertension in Nigeria was done 20 years ago. Prof. Akinkugbe further noted that Nigeria could not tackle its growing population of hypertensive patients if it was still working with outdated statistics.

Nigeria is one of many developing countries where the health services have focused on treating infectious diseases, such as malaria and tuberculosis, but in recent years, non-communicable conditions have become an increasing problem. One of the most prevalent non-communicable.

This story was published in Newswatch Times on Sept 5,  2013.
http://www.mynewswatchtimesng.com/scientists-find-cure-high-blood-pressure/
Posted by Chioma Umeha at 16:51