Over one in eight adults are now obese - a ratio that has more than doubled since 1975 and will swell to one in five by 2025, a major survey reported Friday. 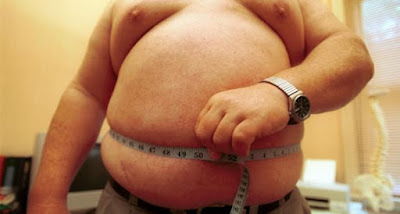 Of about five billion adults alive in 2014, 641 million were obese, the data showed -  and projected the number will balloon past 1.1 billion in just nine years, an online report said.
The research warned of a looming crisis of ‘severe obesity’ and disease brought on by high-fat, high-sugar diets causing blood pressure and cholesterol to rise.
"There will be health consequences of magnitudes that we do not know,"  author Majid Ezzati of Imperial College London told AFP.
The survey, published in The Lancet medical journal, claimed to be the most comprehensive of its kind conducted to date.
People are divided into healthy or unhealthy weight categories based on a universally-adopted measure dubbed Body Mass Index (BMI) - a ratio of weight-to-height squared.
A healthy BMI ranges from 18.5 to 24.9.


One is considered underweight below 18.5, overweight from 25 up, and obese from 30  - when the risk of diabetes, stroke, heart disease and some cancers escalates massively.
Posted by Chioma Umeha at 19:23