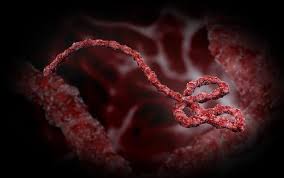 By Chioma Umeha
Fresh revelations emerged on Monday, concerning the dreaded Ebola Virus Disease (EVD) which claimed thousands of lives in West Africa, including Nigeria as researchers identified mutations in the virus that increased its ability to infect human cells from 2013 to 2016. The findings have been reported by two independent teams of researchers according to online news reports.
In 2013, the Ebola virus started cutting a deadly swath through Guinea, Liberia and Sierra Leone, where it eventually infected 28,000 people, killing 11,000 of them. As it passed swiftly from person to person, a gene bearing the program for a key protein mutated in several places, researchers have found.
In two articles published weekend, in the journal: Cell, researchers report that several of the mutations they observed made the virus better at infecting the cells of humans and other primates. Compared to a viral sample collected very early in the outbreak, samples that carried one of the mutations detected by researchers were twice as successful at infecting human cells being cultured in a lab.
By increasing the virus’s ability to hijack human cells and turn them into tiny factories for the production of more virus, it’s possible the detected mutations boosted the deadly spread of Ebola virus in the course of the three-year outbreak.
The researchers underlined that social factors, such as increased urbanization and mobility, did much to accelerate the spread of Ebola during West Africa’s 2013-2016 outbreak. But the virus’s changing makeup may also have played a role, they said, since research has shown that genetic shifts that boost a virus’s ability to replicate in human hosts typically result in higher death tolls.
The suspicion that changes in the Ebola virus’s genetic makeup helped fuel the epidemic is also supported by data that link different viral strains to death-toll reports. In the West African outbreak, humans infected with strains of Ebola virus bearing the most potent mutation detected in the new research were more likely to die of the disease than those infected with an Ebola strain without the mutation.
The new research helps shed new light on an Ebola outbreak that racked West Africa and frightened the world. It underscores that when a disease-causing virus escapes from its “reservoir” – a nonhuman animal population in which it continues to circulate between human outbreaks (for Ebola, it’s bats) -that virus gains new opportunities to adapt to human hosts and grow stronger. And once such a virus begins passing easily among large numbers of humans, opportunities for further mutation proliferate.
Evolution is a fitful process, and some of the mutations found by the research teams made strains of Ebola virus less virulent. Also, not all genetic changes in a virus are important. Some viral mutations are effectively one-off events that are not passed on to every copy of the virus as it goes forth and replicates.
The mutations found in the new studies, however, appear to be changes that were carried forth to their viral progeny. For that reason, and because the mutations detected in the new research seem to have improved the virus’s ability to enter and take over human cells, these findings appear to be important.