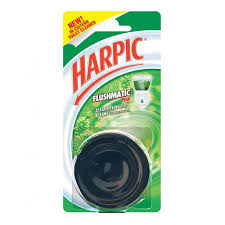 By Chioma Umeha
No fewer than 120 million people in Nigeria lack access to improved sanitation facilities, thereby exposing them to public health hazards according to recent report from the United Nations Children’s Fund(UNICEF).
This is just as the 2015 reports of World Health Organization (WHO) and UNICEF confirmed that an estimated 2.4 billion people live in poor sanitation conditions with one in every 10 of them defecate in the open.
The report also said that Nigeria ranks fifth in the world among countries where open defecation is still a major problem.
This puts millions of Nigerian women and children are at the risk of contracting infections due to unhygienic and poor sanitary conditions, the report added.
In view of this, Harpic, one of the leading toilet cleaning brands from RB, is partnering with the Lagos State Ministry of Environment to upgrade the toilet facilities within Apapa LGA in Lagos state.
Harpic has been in the vanguard of promoting importance of good public hygiene. The brand also advocates access to clean toilets and improved general sanitation conditions in the interest of public health.
To mark this year’s the World Toilet day the brand commissioned one of the public toilets it rehabilitated in Apapa, Lagos.
Speaking at the commissioning, Mr. Rahul Murgai, Managing Director, RB West Africa reinforced Harpic’s Vision and commitment in co-creating an eco-system to scale-up national awareness on sanitation issues like open defecation that lead to diarrhoea and other potential health problems.
He further stated that individual and collective participation from like-minded players will strongly support the programme and efforts of the Federal and State government in improving the general health, hygiene and sanitation conditions in the country.
Dr. Samuel Babatunde Adejare, Lagos State Commissioner for Environment in his welcome address commended Harpic for their continued efforts and support in building a hygienic community and a healthy nation at large.
Dr. Adejare stated that public awareness and the recent renovation of public toilets with support from Harpic is another step taken in the right direction.
He called for greater partnership from the private and public sector to further accelerate their current efforts.
Also speaking at the event, Bamigbaiye-Elatuyi Omotola, Marketing Manager Harpic, explained that Harpic’s toilet hygiene programme in Nigeria is a scaled initiative across 16 cities and reaches over one million homes annually.
Omotola said that the goal is to educate consumers about the importance of good toilet hygiene, how to maintain clean toilets in their homes, offices and around the environment to prevent illnesses.
She solicited for collaboration among members of the society in achieving a behavioural change to tackle the menace of open defecation.
She urged the residents of the Apapa community to ensure the renovated and upgraded toilet facilities are well utilized and that proper sanitary practices will definitely improve public health.
Present at the event were notable dignitaries from the Lagos State Government, some members of the State House of Assembly, heads of government agencies and key executives from RB.