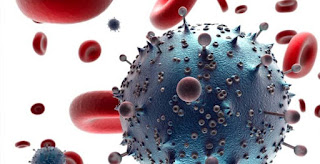 By Chioma Umeha
Scientists in Britain have developed a type of HIV test using a USB stick that can give a fast and highly accurate reading of how much virus is in a patient’s blood.
The device, created by scientists at Imperial College London and privately-held United States firm DNA Electronics, uses a drop of blood to detect HIV. It then creates an electrical signal that can be read by a computer, laptop or handheld device.
The researchers say the technology, although still in the early stages, could allow patients to regularly monitor their virus levels in a similar way to diabetes patients checking their blood sugar levels.
It could be particularly useful in remote settings to help HIV patients manage their treatment more effectively.
Current tests to detect virus levels take at least three days and involve sending a blood sample to a laboratory.
“At the moment, testing often requires costly and complex equipment that can take a couple of days to produce a result,” said Graham Cooke, who co-led the research from Imperial’s department of medicine.
“We have taken the job done by this equipment, which is the size of a large photocopier, and shrunk it down to a USB chip.”
The test, which uses a mobile phone chip, requires a drop of blood to be placed onto a spot on the USB stick.
Any HIV in the sample triggers an acidity change, which the chip transforms into an electrical signal.
This is sent to the USB stick which shows the result on a computer or electronic device.
Published in the journal: Scientific Reports, the results showed the stick test was 95 per cent accurate over 991 blood samples.
The average time to get a reading was 20.8 minutes.
Some 36 million people worldwide are infected with the human deficiency virus (HIV) that causes Aids.
Current Aids drugs reduce virus levels in a patient’s blood to near zero. But in some cases the drugs stop working – sometimes because the virus has developed resistance – and the first sign would be a rise in a patient’s so-called “viral load”.
Virus levels cannot be detected by routine HIV tests, which can show only whether a person has the virus.