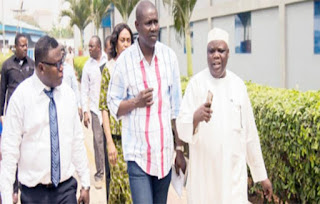 Chioma Umeha
Pharm. Ahmed Yakasai, President, Pharmaceutical Society of Nigeria (PSN), has described Fidson Healthcare Plc, multi-billion naira manufacturing plant at Ota, Ogun state as a state-of-the-art world-class facility with all the ultra-modern high-tech machinery that will enable the country to achieve national security through the supply of quality medicines at affordable prices.
Yakasai who said this recently, when he led a powerful team of his National Executive Council (NEC) members in a familiarisation visit to the factory, noted that it is the biggest pharmaceutical manufacturing plant in West Africa, and added that the company deserves the support and patronage from government and other stakeholders.
The PSN boss, in a release, said that the team was warmly received by Pharm. Biola Adebayo, the Executive Director, Operations.
He said that after going round the facility, “the PSN team agreed that the factory is a world class facility with all the ultra-modern high-tech machinery you can think of anywhere in the world.”
The PSN President said that the state-of -the-art facility were producing tablets, capsules, dry powder, liquids, cream and ointment and indeed large and massive lines of intravenous fluids.
“Honestly, we were highly impressed and encouraged. This is a great achievement in our march towards achieving national security through the supply of quality medicines at affordable prices.
“No doubt pharmaceutical sector can be a goldmine if given the required attention by the government and by so doing maintaining the medicines in the exclusive lists of the constitution not as suggested by El-Rufai APC committee that Food and Medicines should be transferred to concurrent lists,” Yakasai stated.
He added, “Fidson is no doubt a national pride. This is the only way I can define the love and devotion to our country by the founder of this company, Fidelis Ayebae. This is true patriotism in action and he needs to be encouraged and supported by government – support in real terms which is not only by way of intervention funds but also patronage with prompt payment.”