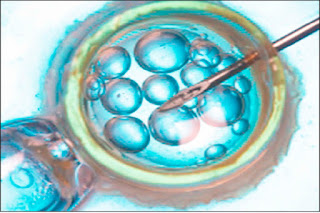 Assisted Reproductive Technology (ART) includes all fertility treatments in which both eggs and sperm are handled outside of the body. In general, ART procedures involve surgically removing eggs from a woman’s ovaries, combining them with sperm in the laboratory, and returning them to the woman’s body or donating them to another woman. The main type of ART is in vitro fertilization (IVF).
Types of ART
Common methods of ART include: In vitro fertilization (IVF), meaning fertilization outside of the body. IVF is the most effective and the most common form of ART.
Zygote intrafallopian transfer (ZIFT) or tubal embryo transfer – This is similar to IVF. Fertilization occurs in the laboratory. Then the very young embryo is transferred to the fallopian tube instead of the uterus.
Gamete intrafallopian transfer (GIFT) involves transferring eggs and sperm into the woman’s fallopian tube. Fertilization occurs in the woman’s body. Few practices offer GIFT as an option.
Intracytoplasmic sperm injection (ICSI) is often used for couples with male factor infertility. Sometimes it is also used for older couples or for those with failed IVF attempts. In ICSI, a single sperm is injected into a mature egg as opposed to “conventional” fertilization where the egg and sperm are placed in a petri dish together and the sperm fertilizes an egg on its own.
ART procedures sometimes involve the use of donor eggs (eggs from another woman), donor sperm, or previously frozen embryos. Donor eggs are sometimes used for women who cannot produce eggs. Also, donor eggs or donor sperm is sometimes used when the woman or man has a genetic disease that can be passed on to the baby. An infertile woman or couple may also use donor embryos. These are embryos that were either created by couples in infertility treatment or were created from donor sperm and donor eggs. The donated embryo is transferred to the uterus. The child will not be genetically related to either parent.
Surrogacy
Women with no eggs or unhealthy eggs might also want to consider surrogacy. A surrogate is a woman who agrees to become pregnant using the man’s sperm and her own egg. The child will be genetically related to the surrogate and the male partner.
Gestational Carrier
Women with ovaries but no uterus may be able to use a gestational carrier. This may also be an option for women who shouldn’t become pregnant because of a serious health problem. In this case, a woman uses her own egg. It is fertilized by her partner’s sperm and the embryo is placed inside the carrier’s uterus.