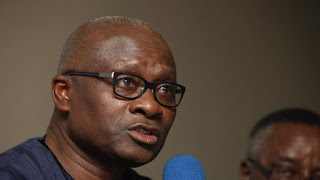 The Lagos State Government has sought the support of public servants in the successful implementation of the soon to be launched mandatory Lagos State Health Scheme (LSHS).These are  especially in the areas of propagation of information about the scheme, its benefit packages and roles of stakeholders.
The Health Commissioner, Dr. Jide Idris, said the role of public servants just like other stakeholders is important in the successful implementation of the scheme.
Dr Idris stated this at the meeting organised by the Lagos State Health Management Agency (LASHMA) in collaboration with the Ministry of Health and the Public Service Office to sensitise public servants on the scheme.
“The reason for this sensitisation meeting is to educate and sensitise you on the reasons for the roll out of the scheme, policy decisions and the modalities of the scheme.
“Others are the plans, the benefit packages, service provision, premium breakdown and payment modalities as well as your roles and responsibilities of enrollees and stakeholders in the scheme,” Idris said.
Dr Idris said LSHS is a compulsory health insurance programme established by the enabling law of the state to ensure all residents of Lagos State have access to affordable and quality healthcare, as the scheme is aimed at protecting people living in Lagos from financial distress resulting from huge medical bills.
Idris while explaining that the premium payment for a family of six is N40,000 per year and premium for single enrolment is N8,500 per year, said a premium subsidy of 75 per cent was approved by the Lagos State Executive council for public servants, “What this means is that the state government will pay 75 per cent of the premium while public servants will only be required to pay 25 per cent,” the Commissioner said.
He noted that LSHS apart from increasing access to quality health care services without financial hardship is also providing enrollees with options of accessing these services at public or private health facilities.
Similarly, Mrs. Folasade Adesoye, the Head of Service, Lagos State Public Service, stated that it is important for public servants as key stakeholders and potential beneficiaries of the scheme to understand their roles and what they stand to gain from the scheme.
The Head of Service stated that the sensitisation programme will be a continuous activity until the required awareness and information are entrenched within the public service communities.
Dr. Peju Adenusi, General Manager of LASHMA, while giving an overview of the scheme, explained that the LSHS Bill was signed into Law in May 2015.
She added that the law which established LASHMA, LSHS and the Lagos State Health Fund (LASHEF) will serve as a basket of funds from several sources for the provision of health care services for the enrolled population.
Adenusi said the Lagos State Residents Registration Agency (LASRRA) registration number shall be a prerequisite for accessing any benefit available under the schemes.
She disclosed that the services to be provided under the scheme otherwise known as benefit package will cover a wide range of healthcare including, antenatal and postnatal care, normal delivery and Ceaserian operation, care of newborn, prevention of mother to child transmission of HIV, immunisation, family planning among others.