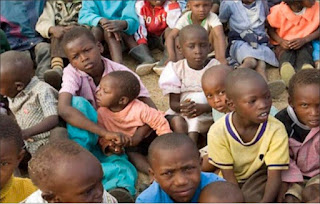 Dr. Davis Bamidele Omotola, a Nutrition Consultant, has said that about 25 million children under the age of five are currently affected by malnutrition in the country, adding that the high prevalence rate of malnutrition has remained precarious in Northeast Nigeria.
Speaking recently  during a presentation at the Media dialogue with Journalists and interface with OAPs on Child Malnutrition in the Northeast organised by the United Nations Children Fund (UNICEF), and Child Rights Information Bureau of the Federal Ministry of Information and Culture in Yola, Adamawa State,Dr. Omotola said that monies wasted on needless programmes can be invested in malnutrition.
Dr. Omotola who spoke on the topic “Child malnutrition and the emergency in northeast Nigeria,” also disclosed that Nigeria currently requires about $100 million to curb the menace of malnutrition in the country. According to him, every six children is reported to have chronic malnutrition or stunting in three northeast emergency states. He observed that Children in Northeast Nigeria are the most hit by the malnutrition crisis in Nigeria.
“Child malnutrition is recorded very high mostly in northern states. One Severe Acute Malnutrition (SAM) case is reported in every seven children in nine north east emergency states.
“Prevalence rate of acute malnutrition among children under the age of 6-13 has stood nationally at seven per cent.
While Northwest has 50.4 per cent of stunting malnutrition, Northeast has 42.8 per cent, North-Central 29.8 per cent, Southwest 20.8 per cent, South-South 20.4 and Southeast 7.1 per cent,” he said.
While identifying malaria and diarrhea as the main killers of children under the age of  five, Dr. Omotola said that 30 per cent of these deaths would have been prevented if adequate care was given to the children.
He stressed that the first 1000 days in the life of every child is very crucial. “That is from the day the child was conceived to when he is  two years,”  he added.
He further identified poverty, maternal nutrition, insurgency, high food insecurity, increasing the spread of endemic diseases and low coverage of immunisation programmes as factors affecting malnutrition in the northern part of the country.
While calling for collaborative efforts towards investing in child malnutrition for a better future, Dr. Omotola called on the Federal Government to do more in terms of releasing funding meant for addressing health-related issues in the country.
On his part, Minister of Information and Culture, Alhaji Lai Mohammed, said that while malnutrition constitutes a serious setback to the socio-economic development of a nation, sustainable growth in Nigeria cannot be achieved without prioritised efforts to scale-up and sustain investment for nutrition.
Represented by Olumide Osanyinpe, Deputy Director/Head, Child Rights Information Bureau, Federal Ministry of Information and Culture, Mohammed lamented that the country is bearing a large burden of malnutrition.  Mohammed  called for collaborative efforts toward investing in child malnutrition for a better future.
“Malnutrition is a large burden to a country, and tackling malnutrition entails empowering and educating people. Improved nutrition is key to improved national and human development and this can be done by educating the populace and creating a positive approach towards nutrition.
“Addressing nutrition is one of the ways through which sustainable development goals can be achieved, therefore investment in nutrition will help reduce the negative trend of malnutrition which has been ensured by creating this dialogue,” the Minister said.
While calling for a collaborative effort to reduce the tide, he  further commended the effort of UNICEF and DFID over the priceless contributions towards promoting the health of Nigerian mothers and children as well as ensuring that the goals of health strategies targeted are met through constant dialogues.
Also, Dr. Martin Jackson, UNICEF nutrition officer, Bauchi while speaking on the topic, “DFID support for child malnutrition in the northeast,” said that the DFID has so far distributed vitamin A supplement in some local government areas in Borno and Yobe states.
He advised fathers to be fully involved in the nutrition of their children, adding that exclusive breastfeeding improves the growth of a healthy child.