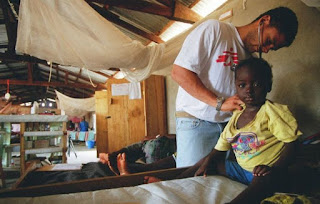 The Medicines Sans Frontiers (MSF)–(Doctors without borders) on Friday, handed over an ‘observation bay’ for Lassa Fever patients to the Federal Teaching Hospital (FETHA) Abakaliki, Ebonyi State.
The MSF Project Coordinator in Ebonyi, Miss Julia Hills, said that the facility was provided to reduce the infection rate of disease especially among the health workers.
Hills noted that the observation bay would assist in reducing the high rate health workers contract the disease and other haemorrhagic fever when providing care to suspected patients.
“It has facilities that will ensure thorough observation of suspected patients and provide the needed isolation.
“The facility would also assist health workers to provide adequate care and required services to suspected Lassa fever patients,” she said.
She said that the MSF was concerned over the fatality rate of the disease in the state especially among health workers in the hospital.
“We are providing two of such facility in the hospital and with the commendable collaboration of the hospital’s staff and management, we hope to sustain the partnership,” she said.
Dr Emeka Ogah, FETHA Chief Medical Director said that the facility worth millions of naira was one of the gains of the partnership between the hospital and the MSF.
Ogah noted that the MSF would hand over another observation bay bigger than the one being handed-over.
“This is for the service of men and women who will present suspected cases of Lassa Fever as we are lucky to have a partnership with MSF.
“This partnership will last for the initial four years and by God’s grace, may be extended beyond that,” he said.
The CMD noted that aside the provision of the bay, the MSF constructed an incinerator, redistributed chlorinated water to the Lassa Fever virology centre at the hospital and provided a building for laundry services.
“The MSF has also donated large quantities of consumables, trained and re-trained over 200 staff of the hospital and has concluded plans to pay the bills of patients who suffer from Lassa Fever,” he said.
He noted that the samples of suspected lassa fever cases were no longer taken to Irrua specialist hospital in Edo due to the provision of the virology centre at the hospital by the Ebonyi government.
“The virology centre, in spite of these success stories, is still faced with challenges which include lack of space, inadequate electricity supply, human resources, steady supply of reagents for diagnosis, labour ward, theatre,” he said.
Alhaji Ahmed Ramalan, Chairman of FETHA Board of Directors, commended the FETHA management for its proactive approach to administration, noting that such had attracted lots of successes to the hospital.
“This characteristic enabled the hospital to keep pace with the MSF team and together, they have contained the lassa fever menace in record time,” he said.
Dr Daniel Umezurike, Commissioner for Health in Ebonyi noted that the state government provided the virology centre at the hospital due to its desire to check incidences of Lassa Fever and other hemorrhagic fever.
“The centre serves the entire south east zone and beyond as the fatalities recorded in time wastage while taking samples to Irrua, have been eliminated,” he said.
The News Agency of Nigeria (NAN) reports that goodwill messages were delivered on the occasion by the World Health Organisation (WHO), Federal Ministry of Health and the Nigeria Centre for Disease Control.