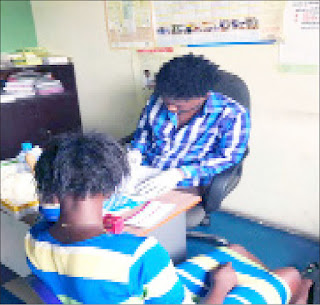 Research has shown that knowing one’s HIV status can help in making healthy decisions to prevent acquiring or transmitting the Human Immune Virus (HIV).
Nigeria is home to 10 per cent of Adolescents Living With HIV(ALHIV) globally, that is about 240,000, according to a project initiated in response to the 2016 National Adolescents and Young Peoples (AYP) HIV strategy.
However, this number is not reflected in HIV Testing Services (HTS) and Antiretroviral Therapy (ART) services, hence the need to identify Adolescents Living With HIV and put them on treatment.
To this effect, a new study seeks to find adolescents living with HIV, link them to treatment, and ensure they remain in treatment.
It also seeks to observe and document factors that facilitate successful scale - up in identification and treatment of AYP living with HIV in service programmes in three States in Nigeria including, Lagos State.
However, the study uses family-based and index case finding approaches as an entry point to identify AYP aged from 10 to 24 years.
The methods include family attending HIV treatment sites, support groups as well as Orphan and Vulnerable Children’s (OVC) programmes.
These approaches involved determining HIV prevalence of persons from age 10 to 24 recruited through family attending treatment and support sites.
It further entailed ascertaining predictive factors for identifying AYP living with HIV who were recruited through family attending HIV treatment and support sites within Lagos State.
The review of the study carried out with the support of Lagos State Aids Control Agency (LSACA) in collaboration with Positive Action for Treatment Access (PATA) and United Nations Children’s Fund (UNICEF) in Lagos was a major agenda recently, in the state.
The review was aimed at intensifying HIV response for adolescents and young people in the state.
Speaking at the event, Mrs. Victoria Isiramen, UNICEF HIV Specialist said, “Young people are the present, and we need to engage them. Many say it is not easy finding young people; maybe because they do not come out.
“The index finding is a way of identifying adolescents with this virus and putting them on treatment. This work was done in Benue, Federal Capital Territory and now Lagos.
“UNAIDS believes that our children should be born free and live free of HIV, and we at UNICEF promise to give in our best.”
Isiramen said, “It has identified that we have more females with this virus than males.The partnership keeps HIV response for adolescents and young people (AYP) in focus and together we can find and save adolescents and young people living with HIV.What we are doing is to ensure that the AYP have a friendly and welcoming service so as to keep preventing this ailment.”
Giving the breakdown of the index case she said; “8525 index cases were identified; 105 known positives; 42 per cent aged between 10 and14-years-old tested positive; 10156 adolescents and young people traced and tested; 36 per cent adolescents and young people tested positive.
She added that 50 per cent aged 10-14 years tested positive and 8 percent adolescents and young people aged 20-24 years tested positive.
The UNICEF HIV Specialist said the index adult cases were identified through support groups and anti retroviral clinics located in public health facilities.
She said while the index sibling cases were identified through the ART clinics and, Orphan and Vulnerable Children (OVC) programmes run by non-government organisations located in Lagos State.
Isiramen said that the index-case finding tool was used to collect details of children and AYP in the care of the index adults and index siblings.
She however said that the National Client Intake Form was administered to children and AYP identified through the index cases that were tested for HIV through this project, adding that a questionnaire was also administered to the AYP identified, to assess their socio-demographic information, sexual behaviour and practices.
According to her, “Data collection was monitored to assure quality. Data was analysed to determine the HIV sero-discordancy rate; differences in HIV sexual risk behaviour and practices of HIV-positive and HIV-negative AYP; and predictors for HIV positivity.
“Ethical clearance of the study was obtained from the Nigeria Institute of Medical Research Institutional Review Board.”
Making his presentation, Isaac Moses in a Project Review of PATA said, “It was found that index case finding was more efficient for recruiting children and younger adolescents than older adolescents and young persons.
“That the approach increased the number and proportion of AYP accessing HIV testing and ART services at facilities. A large proportion of children and siblings 57.3 per cent of index cases did not know their HIV status.”
Moses said 36 HIV positive AYP were identified, equally spread between males and females.
He said, study also found a proportion of wards/children of index cases practicing unprotected vaginal sexual intercourse.
Significantly, he said, more HIV-positive than HIV-negative AYP use condoms during vaginal sexual intercourse.
Moses said “the highest rates of HIV positivity yield was found within the AYP aged 10-14 year-old: 42 percent. In the overall study, as high as 5.7 per cent of HIV-negative AYP are eligible for Pre -exposure Prophylaxis, (PrEP).”
On recommendations, Moses said the study posits that index case finding through family approach is an efficient way of generating high yield rates for HIV testing for AYP.
He said that targeted HIV testing of AYPs who are married, have a positive history of sexually transmitted infection, symptoms of tuberculosis, and or are aged 20-24-year-olds will likely yield high HIV positivity rates.
He states, “When index case finding approach is to be used; recruitment of the first to fourth children of index cases will likely yield more HIV positivity cases.
“Access to pre-exposure prophylaxis (PrEP) needs to be prioritised for sexually active HIV-negative AYP.
“Studies need to be conducted to learn how to best reach HIV-positive AYP through messaging on protected sexual intercourse, the value of accessible treatment, viral suppression, and non-transmission of HIV infection.”
Studies should include filter questions, as non-respondents to questions on age of sexual debut and history of sexual intercourse are more likely to have high risk sexual behaviour, a history of sexual assault or be HIV positive, he explained.