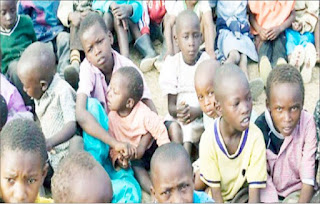 Currently, Nigeria is tenth in the list of worldwide hungriest nations, despite the global target to end hunger by 2030. Analysts say they are seriously worried that hundreds of Nigerians, especially in the north-eastern part of Nigeria are experiencing chronic hunger and the threat of famine. Conflict, recurring severe drought, and high food prices are to blame.
Unfortunately, 35 million Nigerian children aged five and below in the north-eastern part are today affected by Severe Acute Malnutrition (SAM).
The insurgency and activities of Boko Haram within the region have severely worsened the levels of malnutrition. Recent statistics from the United Nations Children’s Fund (UNICEF) revealed that Global Acute Malnutrition (GAM) in the region has crossed the threshold for ‘serious.’
The World Health Organisation (WHO) classification for ‘serious’ depicts levels of combined moderate and acute malnutrition exceeding 10 in 100 children.
In addition, the levels of malnutrition in three states in the North- East- Central Borno, Municipal Maiduguri, Jere; South, Central, and North of Yobe, have crossed the threshold.
Northern Yobe has a higher proportion of child malnutrition even as 14 in 100 children in the area weigh too little for their height while, another 11 in 100 are too thin for their height, the UNICEF report added.
Furthermore, death among children under five years old is higher in Central Yobe, which is as high as 3 in 100 children.
Reports from UNICEF also showed that insurgency remains the major driving factor of malnutrition in the region.
The media has been awash with reports of how insurgency has disrupted farming and food security for households.
Now, infant and young child feeding have become sub-optimal and this, thereby, increasing the spread of endemic diseases like cholera that has worsened nutrition status of children in the region.
Dr. Davis Omotola, the UNICEF Nutrition Consultant, said insurgency remains the main driver of malnutrition in the North-East, observing that the crises have resulted in high food insecurity, sub-optimal infant and young children feeding practices such as untargeted/uncontrolled infant formula distribution, negative coping strategies.
Speaking in Yola during a two-day media dialogue on child nutrition in North-East Nigeria organised by UNICEF, in collaboration with Child Rights Information Bureau, CRIB, of the Federal Ministry of Information and Culture and other partners.
“Insurgency has also led to increased spread of endemic diseases, limited dietary diversity, loss of livelihoods, disruption of access to quality water and optimal sanitation, population displacement and destruction of housing, compromising the privacy necessary for breastfeeding; and nutritional care, poor and deteriorating healthcare system and low coverage of programmes targeting children with moderate acute malnutrition,” Omotola said.

Noting that programmes targeting children with moderate acute malnutrition are inadequate, he said one in two children in the three states suffers chronic malnutrition, compared with one in five across the rest of the country.
According to a UNICEF report, nearly 440,000 children need treatment for Severe Acute Malnutrition with ready-to-use therapeutic food and almost 44,000 of them have medical complications that first need to be treated.
Investigations by DAILY INDEPENDENT shows that intervention funds earmarked for the region by federal and state governments combined dwindled from $3.3 billion in 2016 to $3.1 billion.
He also revealed that about 50 percent of children in the 12 Northern states are stunted while only 20 percent of children in the rest of the country is stunted.
Omotola lamented that despite the increasing challenges of malnutrition funds were not released early.
“For instance, nearly half of the funds released for 2017 were released in 2018. In 2016, $2.75 million was committed only $1.2 million was released.
“In 2017, a total of $5.5 million was committed, only $3.97 million was released. This year, $3 million was committed and only $0.02 million has been released so far.”
Since studies have shown that for every dollar invested in reducing stunting among children in Africa, there is a return of investment of $16, he, therefore, called for a change in policy implementation.
He also said that investing in nutrition will save 33 percent of children from poverty in adulthood leading to economic and social change.
Similarly, Dr Martins Jackson, UNICEF Nutrition Officer, said that through the efforts of UNICEF in collaboration with the United Kingdom’s Department for International Development (UK-DFID) in tackling the menace in Borno and Yobe states no fewer than 1, 239, 802 children were given Vitamin ‘A’ supplementation in the two states.
Jackson further said 195,000 pregnant women were given Iron Folate to prevent them from anemia, while 32,000 mothers received N5, 000 each on monthly basis as an incentive for exclusive breastfeeding and complementary feeding.
“These interventions were geared toward improving nutritional security of under-five children, pregnant and lactating women, as well as promoting nutrition in the first 1,000 days of life”.
With the death of one in five Nigerian children of Severe Acute Malnutrition(SAM) in the absence of treatment according to a UNICEF report, experts have raised an alarm that children with SAM has nine-fold risk of death, unlike well-nourished ones.
In view of this, Nigerians in the North-East have been urged to say, no to violence and save children from malnutrition and preventable deaths.