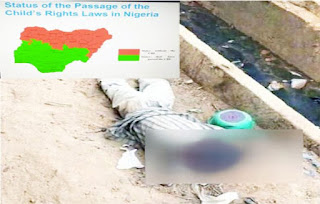 Chioma Umeha
Three decades after Nigeria adopted the Convention on the Rights of the Child  (CRC), the Bill is still existing in papers in many of the States as only 25 of them have ratified it, even as 12 States, mainly from the North are yet to domesticate the law.
This is just as anxious child protection experts announced to journalists on Monday that poverty, community disintegration, family dysfunction, and child vulnerability are drawbacks to the actualisation of the Child Rights Laws in the country.
According to them, failure in meeting the developmental needs of the Nigerian children makes him a victim of several forms of violence, the consequence is non-implementation of the Act in the country.
Among the experts was Sharon Oladiji, Child Protection Specialist, United Nations Children’s Fund (UNICEF), said at a two-day media dialogue on the Convention on the Rights of the Child (CRC@30) held in Lagos who gave a breakdown of the slow trend in the Bill’s domestication.
She noted that 11 out of the 36 states of the federation, in addition to the Federal Capital Territory (FCT) have not domesticated the Act bringing the number to 12.
Providing further analysis, Oladiji said, the 11 states are all from the north, including, Sokoto, Kano, Zamfara, Kaduna, Jigawa, Katsina, Bauchi, Yobe, Borno, Adawama and Gombe.
“Only eight states out of the North’s 19 states have domesticated the Act. They are: Niger, FCT, Nasarawa, Taraba, Benue, Plateau, Kwara and Kogi and all 17 states in the south have domesticated the Act.
While Jigawa state had earlier domesticated the Act, but repealed it thereafter,  Oladiji observed in her presentation, titled; “Topic: ‘Domestication of the CRC; the CRA legal framework,’ at the dialogue organised by the Child Rights Information Bureau (CRIB) of the Federal Ministry of Information and Culture, in collaboration with UNICEF.
The Child Protection Specialist stressed; “We must promote all opportunities that will help sound development in children. Lack of access to developmental need is detrimental to the rights of children.”
Oladiji further said that investing in a child is paramount for Nigeria and Africa as a whole to realize the right of the burgeoning child population, adding that a healthy development of a child is crucial to the future wellbeing of any nation.
“Special attention is required for Nigeria which is the country with the largest increase in absolute numbers of both birth and child population, it is time we acknowledge our shared responsibility and address this issue.”
Olumide Osanyipeju, Director, Child Rights Information Bureau (CRIB) Federal Ministry of Information in his remarks, said that the UN Convention on the rights of the child is a comprehensive statement which would be binding under international law and became necessary with reports of grave injustice suffered by children.
The prejudices he said, ranged from high infant mortality, deficient health care, limited opportunities for basic education, alarming accounts of children being abused and exploited as prostitutes or in harmful jobs, Children in prison or in other difficult circumstances.
He added that it is equally worthy to note that it has really been an uphill task bringing to fruition the total realisation of children’s rights in our society, especially in the rural terrains which constitute the bulk of our society and where a vast majority of our people are not literate.
“The situation that stares us in the face is the tall order to bring our people to understand that children deserve as many fundamental rights as the adults, and the need to protect the rights of our children at risk of deprivations of basic social benefits, in exploitative and difficult circumstances, and even mortality.”
Mrs. Blessing Ejiofor, UNICEF Communication Officer, stated the objectives of the workshop which include; taking advantage of CRC@30 anniversary to renew alliances and inspire broader movements for children across the media in Nigeria, introduce the global CRC@30 campaign and highlight UNICEF Nigeria’s engagement plans.
Others are how the media can support the campaign and provide a platform to review media advocacy on children’s rights in Nigeria vis-a-vis the CRC, identify and plan new ways to push for increased financial and non-financial investments in children with a focus on emerging trends and threats to childhood in this millennium.
Also, UNICEF Chief of Communication, Eliana Drakopoulos, said media has a role to play in this global campaign adding, CRC was adopted by the General Assembly of the United Nations by its resolution of November 20, 1989, has the same meaning for people in all parts of the world.
The United Nations Convention on the Rights of the Child is a human right treaty which sets out the civil, political, economic, social, health and cultural rights of children
She further stated; “We want to know where we are now 30 years after the CRC. What is the stage of children’s rights?  Have all the States implemented the rights of the children? Children need to know their rights and even parents should know as well.”