To ensure an unbroken record in the Nigeria’s renewed attempt to become polio-free, Lagos state government with support of other local and international partners has successful conducted a second phase of the immunisation campaign against the disease.
Disclosing this at a media/ stakeholders sensitisation workshop in Lagos, Titilayo Goncalves, Permanent Secretary, Lagos State Ministry of Health, said the United Nations Children’s Funds (UNICEF) and other agencies, have successfully concluded another polio vaccination campaign.
According to Goncalves, the state-wide vaccination began Saturday, June 15 and ended Tuesday, June 18, 2019, following the confirmation of environmental strand of Polio Virus in Makoko, Itire and Maracana Canals in the State.
The Permanent Secretary also said the vaccination campaign was to halt the spread of polio virus and increase coverage of immunised children against vaccine-preventable diseases.
She further explained that the vaccination campaign would improve the herd immunity of the environment against the Wild Polio Virus.
Dr. Gonclaves, however, noted that the campaign was aimed at eliminating the polio virus found in the State, stressing that the State governor, Mr. Babajide Sanwo-Olu is very passionate in ensuring that no child in Lagos suffers disability or dies as a result of vaccine-preventable diseases.
She revealed that the second phase of the polio vaccination campaign was in furtherance of the noble goal that all children in Lagos State be covered by the present immunisation campaign, which was done house to house so that the 100 per cent status of polio Immunisation will be attained, maintained and sustained.
According to her; “We have made good progress in this bid with the cooperation and support of other agencies and development partners, but we are still pursuing this goal with great determination and focus so that no single child between zero and 59 months would remain unimmunised or unprotected from the Polio virus.”
Gonclaves explained that the vaccination was an opportunity for parents and caregivers who visited the PHCs and General hospitals in their neighborhood to catch up with the other immunisations.
According to her, polio vaccination is safe, free, not dangerous and can be taken irrespective of former immunisation status, adding that, no child is safe from the vaccine-preventable diseases until immunised.
Recalled that the recent 35th Expert Review Committee for Polio Eradication and Routine Immunisation (ERC), expressed optimism that the Nigerian programme is on course to achieving polio eradication with ‘Impressive progress’ recorded.
The ERC meets periodically to evaluate progress towards the attainment of a polio-free Nigeria. The monitoring body provides guidance to the government and partners.

The summary of the experts’ feedback was contained in a presentation by Dr. Pascal Mkanda, Polio Eradication Programme Coordinator of the World Health Organization (WHO) Regional Office for Africa, after meeting with government officials, partners and other stakeholders in Abuja from March 26-27, 2018 to review progress of the programme in Nigeria.

“With no wild polio virus reported for 18 months in accessible areas, there is a unique opportunity for Nigeria to get the job done within the lifetime of the current administration,” Dr Mkanda said.

Commenting, Dr. Fiona Braka, a representative of the WHO said ; “We are in the middle of an outbreak and we must respond to it. The outbreak response must be of high quality to interrupt the transmission of the virus.

Braka who spoke at the media/ stakeholders sensitisation workshop organised by Lagos state noted,“Nigeria has made remarkable progress in the fight against polio. We are now 32 months without a wild polio virus Nigeria.”
However, she said, “This outbreak we are facing is a different strain and we, therefore, must respond approximately, adding that the goal is to interrupt the virus and that can only be achieved if everyone works collectively to bring out children to get two drops of polio vaccine over the next four days.” 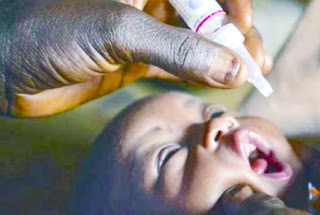 She said, “The virus has been detected in three canals in Lagos State; Makoko, Itire, and Maracana. So far this year, seven viruses have been isolated in Lagos. It is our hope and wishes that why we are all here is that this outbreak will be interrupted as quickly as possible.”

Corroborating, Dr. Tayo Lawal, the Permanent Secretary, Primary Health Care Board, Lagos State, said, the just concluded polio vaccination campaign was house-to-house, transit, and fixed post teams. Children at homes, markets, churches, mosques, major car parks, and social event venues were vaccinated.
He said the transit components of the vaccination team comprised 7381 trained personnel who administered only OPV to children aged zero to 59 months irrespective of their immunisation status.
He added that the vaccination covered eligible children who were encouraged to visit immunisation posts located within all our Primary health care centers and General hospitals for the other antigens.
Dr. Usman Adamu from Primary Health Care Board, Abuja, said data from the last polio campaign revealed that the main reasons some children were not vaccinated in Lagos state included estates and gated communities refusing entry of immunisation teams and many parents claimed not to have heard about immunisation campaign.
As long as a single child remains unprotected by immunisation, there is a high risk for infection to occur, says Adamu, while urging the media to create more awareness on the need for parents to ensure that their children under age five get vaccinated against polio.
Contributing, Hayon Nam, the United Nations Children’s Fund, (UNICEF) Communication For Development Specialist, said part of the role of the media disseminates the correct information to the people so that they can make an informed decision on this activity that can change their lives.
She said the media is the ear, eyes, and mouth of Nigeria and the most reliable trusted source of information.
“We are on the last mile to eradicating polio in Nigeria, However, with the efforts of the media getting the information to the larger population and getting their children vaccinated, we would eradicate polio.”