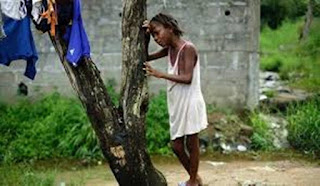 There is growing concern among stakeholders on how to achieve full implementation of laws which protect Nigerian women and girls against abuse from rising Violence Against Women and Girls (VAWG) which many have said is assuming, ‘epidemic proportions.’

Also, unfortunately, the country has achieved less than 20 percent implementation of the Child Rights Act, CRA since its adoption 20 years ago, while the prevalence of violence against women and girls still on the rise.
Revealing this to journalists at recent two-day Media Dialogue in Ibadan, Oyo State on “End Violence Against Women and Girls in Nigeria” James Ibor, a legal practitioner, human rights activist said according to Violence Against Children (VAC) report one in four girls and 10 percent of boys reported having suffered sexual violence in Nigeria. Of the children who reported violence, less than five out of 100 receive support.

Ibor who is also the Chairperson, Child Protection Cross River State said that the VAC report revealed, six out of every 10 Nigerian children experience some form of violence before the age of 18.

According to him, Nigeria has positive legislations that support the protection of women and children. For instance, “We have the Violence Against Person Prohibition Act (VAPP Act) but the implementation is less than five per cent because we still have cases of violence being reported, but little or nothing is done about them,” said Ibor.

Nigeria ratified the Convention for the Elimination of Discrimination Against Women (CEDAW) in 1985, but international treaties can only go into effect when parliament has put in place a corresponding domesticated law thereby limiting the international treaties to disuse.
Ibor added that violence against women and girls is against the law and survivors do not usually receive full legal support, as they may prefer to stay in abusive relationships than leave to face the ridicule of living outside relationships and/ or wedlock.

The human rights activist said, women and girls subjected to violence are unwilling to lodge formal complaints due to lack of trust in the police force and stigmatisation in society.

He counselled that the government should build up a the collaboration that seeks to focus on the legislation policy framework, building institutions, prevention efforts and particularly addressing root causes of gender-based violence and harmful practices; and also ensuring access to inclusive, timely, and affordable, quality service.

He said, based on the consultation on the prevalence of violence, as well as data management, the programme focuses on five high burden states across Nigeria namely: Lagos, Adamawa, Sokoto, Cross-River and Ebonyi, plus the Federal Capital Territory, Abuja.

Speaking also at the event organised by the European Union and United Nations Spotlight Initiative, Dr Olasumbo Odebode, Child Protection Specialist for the United Nations Children’s Fund, UNICEF said “International donors are doing a lot to tackle the issue of Violence Against Women and Girls in Nigeria. The EU-UN doled out $40 million to support the initiative for four years in Nigeria.
“All these are geared towards eliminating all forms of violence against women and girls and all harmful practices in support of the 2030 Agenda on Sustainable Development Goals.”

She further explained that to achieve 2030 Agenda on Sustainable Development Goals, a six comprehensive pillar approach were developed and they are: legislation and policy framework; institution capacity building; prevention and social norms; delivery of quality services by health professionals; data availability and capacities, and supporting the woman movement.

Odebode added that the six pillars are interrelated and when it is holistically tackled, the target of ending violence against women and girls would be achieved in the country.

She said, “So the idea is to attack it from different directions so that it can have a direct impact. We need to create sensitisation in the mind of people and the society at large and also to disabuse the mind of people against discrimination and stigmatisation. We need to create awareness because people need to speak out. It goes beyond the way the people are dressed. Every woman and girl must be free from violence that is the essence of this workshop.”

She said, “When the media is involved, all forms of violence against women and the girl child that had eaten deeply into the fabrics of society can be reduced or totally eradicated.

“The discrimination and stigmatisation of survivors must also stop. People must realise that they should not keep quiet because keeping quiet will make the perpetrators continue.”

Odebode said that the government needs to create an enabling environment so that the laws already in place are implemented and acted upon.

On her part, the Executive Director, Always Sisters Foundation for Care and Support, Mrs Chika Obiechina said carrying out an extensive media campaign in partnership with CSOs and the NGO’s with effective community mobilisation on the issues of violence against women and girls would contribute to ending the menace.