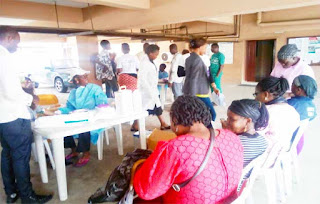 Over 350 million people that is more than the population of the United States are being affected by Hepatitis worldwide.

Yet, many sufferers are not aware they have the deadly scourge of Hepatitis which leaves its survivors with life-threatening conditions like, Liver and kidney failure as well as Cancer.

Only five percent of people with viral hepatitis are aware of the chronic nature of the disease that kills five million Nigerians every year.

To this effect, researchers have raised alarm over growing ignorance about the disease and called for concerted efforts to boost awareness and investment by the Federal Government to tackle it.

Making the call recently were scientists at the Nigeria Institute of Medical Research (NIMR) Lagos, in a symposium to mark this year’s World Hepatitis Day in Lagos.

Hepatitis refers to an inflammatory condition of the liver. It’s commonly caused by a viral infection, but there are other possible causes of hepatitis.

World Hepatitis Day is set aside by the World Health Organisation (WHO) to create awareness about the scourge of hepatitis in the society.

Corroborating, Dr Charles Onyekwere, a specialist on Internal Medicine, Lagos State University University Teaching Hospital (LASUTH), said the bulk of people affected are not aware that they have the disease.

The Consultant Gastroenterologist and Hepatologist, called on the Federal Government to invest in the public health issue towards the elimination of viral hepatitis B and C in the country.

He stated that the 2019 celebration is a timely reminder that this disease can be eradicated by 2030 with adequate resources and strong political commitment.

He added; “The aim is to create awareness so that everybody would have the knowledge of their status and gain access to care.

Adeleye said; “The ignorance of people about hepatitis B and C is huge; so we need the government collaboration and other Hepatologist to help create awareness at every stage; the elite and even the market women, everyone need to be aware of this.’

She further revealed that the chances of survival with chronic hepatitis B is slim if the virus has been in their body for more than six month, as many often have the virus in them for life.

She also said, “Most times, people carry the virus for life and still nothing happens to them only small percentage of 25 per cent to 30 per cent of people with chronic hepatitis B usually ends up with cancer of the liver.”

According to her, this happens especially when the victims had no idea of the presence of the virus in them.

“Hepatitis B virus is treatable not curable, but C virus is curable. However, Adeleye stated, when Hepatitis A and E enters into the body, the body clears it.”

She also said, Federal Government should invest in Hepatitis vaccination so as to ensure the accessibility of the vaccine and also make people realise the role of vaccine in preventing this virus.

The Gastroenterologist said that the WHO developed the first hepatitis scorecard to track progress across the African region. The scorecard shows that the highest-burden of hepatitis B infection in children less than five years is seen in countries without hepatitis B birth-dose vaccination in combination with suboptimal coverage (under 90 per cent) of the childhood pentavalent vaccine.

Testing and treatment as a public health approach remains the most neglected the aspect of the response, she added.

He stated that maximum awareness as well as intervention is needed in creating access to diagnoses, especially for those that are infected.

Speaking with DAILY INDEPENDENT, Princess Adepeju Hameed of SHECA foundation added that the main aim NIMR’s symposium was to eradicate hepatitis by 2030.

She, however, called on other NGOs, ministries of health at both federal and state level to help in this process by creating awareness for people to come out and know their status on Hepatitis.

She added that the theme ‘Finding The Missing Million’ means that there are quite a large number of people that are still positive and they are not even aware of their status yet.