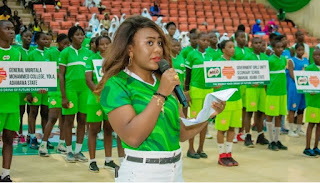 According to Bola Audu, Corporate, Communications Specialist Nestlé Nigeria Plc, six teams from groups A and B competed for the crown on Thursday. "I have had the dream of winning this trophy since 2016, and today, I am happy that this dream has come true," Arinze Nancy Nicholas, coach of Dutse Model International Secondary School in Jigawa State, said on behalf of her team," I'm also pleased that we've qualified for the Lagos final. We are hopeful that we will be able present to win the national finals in Lagos."

Mr. Olutayo Olatunji, Nestlè Nigeria's Category Manager for Beverages, reaffirmed Nestle's commitment to fostering talent, promoting a healthier lifestyle, and instilling values and lessons for success via sports. "Milo, truly believes that children learn life values via involvement in sports that help them on their way to success," he stated. We are therefore pleased to continue to offer the Milo Secondary School Basketball Championship, where these young people can continue to develop traits such as leadership, teamwork, perseverance, courage, self-belief, and respect via their involvement.

"In a nutshell, you keep the GRIT you learn in sports for the rest of your life." We appreciate everyone who helped us make another championship a success.

Puiami Dickson, the outstanding player for the Adamawa team, was awarded the tournament's Most Valuable Player (MVP) in the girls' category. Benjamin Ishaku of Dutse Model School in Jigawa was awarded MVP in the boys' division.

The winners in both categories received a trophy as well as N125,000 and N100,000, respectively, while the runners-up received N75,000 and N60,000. From the 8th to the 12th of May 2022, the Savanna Conference held at the Sanni Abacha Stadium in Kano. The States that make up this constituted this Conference are: Yobe, Borno, Taraba, Zamfara, and host Kano.  A mong others are Gombe, Katsina, Bauchi, and Jigawa are  .

The Central Conference of the Milo Secondary Schools Basketball Championship will be held in Ilorin, the capital of Kwara State, from May 14 to 20, 2022.