The President of the Nigerian Red Cross Society has been Elected to the IFRC Board of Directors in Geneva. 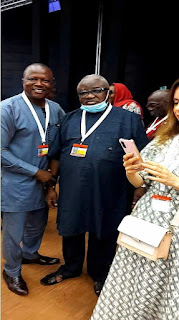 While announcing this weekend, Chima Nwankwo, Coordinator, Communications and Advocacy, Nigerian Red Cross Society, stated that Elder Anani's election is a call to more action to solve difficulties stemming from diseases, disasters, and dehumanization of humanity for many reasons, among others.

Elder Anani, speaking elatedly just moments after his win, adds, "This election is solely for God's glory. My appreciation also goes to the National Societies that elected me to this position.

"This election has inspired me to continue serving in the humanitarian field. There are numerous vulnerabilities, requirements, and challenges resulting from diseases, disasters, displacements, and dehumanization of humans for various reasons.

"The IFRC supports National Red Cross and Red Crescent Societies to alleviate the sufferings of those in need,” he added.

Elder Anani was elected by representatives of 192 National Red Cross and Red Crescent Societies at the IFRC’s 23rd General Assembly which is holding in Geneva.

“This position gives you an opportunity to get involved in such services within Africa and beyond. It is a very challenging service but we are trusting God for wisdom, courage, and provisions to be effective and efficient in fulfilling this office.

"It gives quiet satisfaction for one to know that he is contributing to restore the dignity of mankind. This is the feeling I have," Elder Anani added.

The Governing Board of the IFRC is a high volunteer service.

Elder Bolaji Anani is also the immediate past Chairman of the West Coast Group Meeting of Red Cross National Societies.