Tomorrow is the Global Day of Action for Access to Safe and Legal Abortion. Many girls and women are still going through trauma as victims of rape and incest in Nigeria today. The case of the over 200 Chibok girls abducted last April is unimaginable. Yet, they cannot access the right to safe and legal abortion if they have been abused and are pregnant because of restrictions posed by the 1861 Abortion Law. But, experts have advocated that a total health package recommended by the World Health Organisation (WHO) should be offered to victims of sexual violence, including the abducted girls when they are released. CHIOMA UMEHA (HEALTH EDITOR) writes. 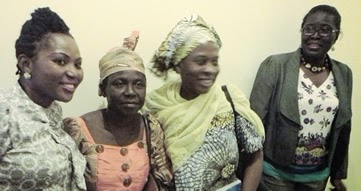 Since the beginning of this week, the media have been awash with fresh reports that the Boko Haram Islamic sect has finally agreed to free all the Chibok girls in a swap deal for 18 of its commanders currently in detention.

It would be recalled that less than two weeks ago it was reported that the insurgents had agreed to release only 30 female students abducted in April in exchange for 18 of its members. The decision was allegedly made after government authorities had held secret talks with one of Boko Haram’s seniors identified as Umar.

However, finally, according to latest media reports, the agreement on the release of 219 girls has been reached.

With this news, the hope of welcoming the abducted school girls back into the society has again been renewed. For parents, guardians and relations of the girls, they just can’t wait to welcome their daughters and sisters who had been in the abductors’ den since April 14. As for the girls, being left off the hook promises to be freedom for a new life where they can live a life of dignity that is devoid of the slavery and servitude that their terrorist abductors have subjected them to.

However, as concerned families and rights activists campaigning for their freedom and the society await their return, the issue of how to meet their immediate health needs has come to the fore. There is no doubt that as victims of abduction, the girls may have been subjected to harrowing rape experience and of course, heartless repeated rape which may have resulted in lacerations. What about possible unplanned and unwanted pregnancies? How about the psychological torture the girls would have been subjected to and the lasting impact of such on their psyche?

Narrating the account of one of the three girls who escaped from the camp of the terrorist Boko Haram, a clergy and expert on counter-terrorism, Oladimeji Thompson, of The Omoluabi Network, who has been working with other groups to assist victims of the abduction overcome their pains said: “One of the girls I interviewed was being raped 15 times by 15 men every day.” The girl was traumatised and confused, he said.

In other accounts, media report has quoted some Chibok girls who escaped as being pregnant. During an interview on the Hausa service of the British Broadcasting Corporation (BBC), former President Olusegun Obasanjo said some of the Chiboks girls are pregnant while others may never return again.

For those that have escaped and the more that may ultimately be released, the question that have naturally reoccurred is: what will the affected girls do with such pregnancies?

While the father of one of the pregnant girl was quoted as saying he does not want to have anything to do with the pregnancy, the girl who survived the abduction said if she is delivered of the baby, she would do away with it. This brings to the fore the hard facts and how to address problems resulting from persistent abductions which are now rampant in the North eastern states of Nigeria. Although, these issues have been on the front burner,  the forthcoming  Global Day of Action for Access to Safe and Legal Abortion, makes them very relevant. The day to be marked on Sunday, September 28, has been set aside to demand de-criminalisation of abortion. The day  has its origin in Latin America and the Caribbean where women’s groups have been mobilising towards the  September 28 event  since the last two decades to ask their governments to decriminalise abortion, tprovide access to safe and affordable abortion services and end the stigma and discrimination towards women who choose to have abortion.

Going by the provisions of the 1861 Abortion Law in Nigeria, women in Nigeria can only procure abortion where the life of the mother is in danger.

Hence, the Chibok girls or those representing them cannot even demand to abort pregnancies arising from some of the rape that occurred during their abductions. Even if the victims choose to terminate the pregnancies, legally, they cannot procure them.

Apart from pregnancies, what about those Chibok girls who had been subjected to rape countless times throughout the period that they were held? What about their injuries, pains and the trauma they are facing presently, among others?

Dr. Nihinlola Mabogunje, Country Director of Ipas in Nigeria, said the focus should shift to how to compensate the Chibok girls in terms of meeting their health needs.

According to her, although, the health needs of a rape victim is wide and big, the relevant authorities should agree that rape victims should be compensated.

Based on this plan, the Chibok girls, other abducted girls, rape and incest victims should be given physical, mental and social wellbeing. She said: “You look at her in terms of if she has a vaginal tear which is possible, it will be sutured; if she develops a fistula, she will be cared for; should she be pregnant, there will be need for her to be provided with medications; if she has HIV, she will be provided with prophylaxis.” She added that the problems of these victims must be addressed in a holistic way so as to provide a way out for them.

Therefore,  the responsibility of the state and federal governments and other stakeholders to the Chibok girls and other women who are subjected to rape should be viewed in this light. The World Health Organisation (WHO) defines health as a state of complete physical, mental and social well-being and not merely the absence of disease or infirmity. Based on this recommendation, the health needs of the Chibok girls must be met.

Already, those girls that escaped are already being offered scholarships to pursue their education. It should be noted that if these girls are not healthy, there will be no education to pursue.

“A man who raped a woman should compensate the woman. It is not just enough for the offender to go to one year jail or thereabout. That punishment is not enough. Mobogunje reasoned that in addition to the penalty, the offender should be made to compensate the victim, and that this should be the new trend. It could reduce incidence of rape in this environment, she said.

Speaking in a similar vein, president of the International Federation of Women Lawyers, Hauwa Shekarau, said even the 1861 Abortion Law  criminalises abortion and only makes it possible for a mother whose life is in danger  to terminate a pregnancy in order to save her life. However,  the law did not specify who determines that the life of the mother seeking to procure the abortion is in danger.

Shekarau lamented that due to the restrictive nature of the Abortion Law in the country, women and girls who are victims of rape and incest are left to their own devices regarding what to do whenever rape results in pregnancy.

There have been moves three different times in the past to change the existing abortion law in line with modern trends especially on the need to meet the health needs of female victims of rape and incest but “they were turned down by mostly religious people and some other women who were guided by their religious beliefs,” she said.

Furthermore, the president of the International Federation of Women Lawyers said a more recent attempt to review the Violence Against Persons Prohibition Bill (VAPP) in the House of Representative similarly suffered a setback.

A clause inserted in the VAPP bill to enable victims of rape and incest who get pregnant to have access to safe termination of their pregnancies if they so choose was deleted before passing that bill. She said if that clause had sailed through, it would have provided for victims of rape, incest and women under some health conditions to terminate pregnancy if they choose.

On another front in Imo State where the VAPP bill was successfully passed with the same clause it generated uproar. Consequently, the Imo State Governor, Owelle Rochas Okorocha, abrogated the law on the basis that there was an outcry by the religious community to the effect that the entire VAPP bill passed by the Imo State House of Assembly was an abortion law.

Having gone through the House of Representative, Shekarau said the VAPP Bill is currently in the Senate. “We are advocating and lobbying to ensure that they include that clause,” she said.

The journey to review the 1861 Abortion Law may be slow; but the stakeholders are not relenting, considering that it would ultimately be to the benefit of the entire women folk. A recent WHO report on ‘Trends in Maternal Mortality: 1990-2013’ classifies Nigeria as on of the 10 countries that contribute about 60 per cent of the world’s maternal mortality burden. Though Nigeria currently has a maternal mortality ratio of 560 per 100,000 live births, the ratio improved slightly, moving from the 630 per 100,000 recorded in 2010.

This high mortality rate in Nigeria falls short of the Millennium Development Goals (MDG) targets for 2015. With 2015 in the corner, there are doubts that the goal of eradicating maternal mortality or reducing the ugly trend drastically will be achieved.

This story was published on September 27, 2014 in Healthy Living Saturday Newswatch.


See more at: http://www.mynewswatchtimesng.com/rape-victims-chibok-girls-need-health-package-experts/#sthash.MCjAYmjk.dpuf
Posted by Chioma Umeha at 16:00