There are strong indications that Nigeria would one day succeed in eliminating Human Immuno-deficiency Virus (HIV)/Acquired Immune Deficiency Syndrome (AIDS) and syphilis infection from mother-to-child.
Confirming this are experts who agree that if Nigeria adopts and implements policies like Cuba, which recently became the number one country in the world to end mother-to-child transmission (MTCT) of HIV, she will achieve the same result.

Recently, and Joint United Nations programme on AIDS (UNAIDS) and World Health Organization (WHO) declared Cuba the first country in the world to eliminate the transmission of HIV and syphilis from mother to child.

In a statement which WHO sent through an international delegation who were in Cuba in March, it (the world health body) and the Pan American Health Organization (PAHO) certified the country as having  met the criteria. In 2013, only two children in Cuba were born with HIV and five with syphilis, the statement said.
The PAHO and WHO credited Cuba with offering women early access to prenatal care, HIV and syphilis testing, and treatment for mothers who test positive. The two organizations began an effort to end congenital transmission of HIV and syphilis in Cuba and other countries in the Americas in 2010.

Reacting to this, Dr. Dan Onwujekwe, Chief Researcher, Clinical Division, NIMR, said: “Ending MTCT of HIV is achievable, it is doable. It is not rocket science, it is what we can do especially, if everyone knows their HIV status; if every woman, who is pregnant, knows her HIV status and is aware of the Prevention of MTCT HIV programme and begins treatment to suppress the viral load before she delivers. We need to also teach them the kind of breastfeeding practice to adopt after delivery, so that the virus is not transmitted to the baby.” 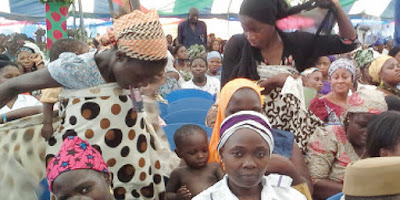 A cross section of women waiting for counseling during the unveiling of
Mrs Abimbola Fashola, wife of the former Governor of Lagos State,
as face of mother-to-child transmission (MTCT) of HIV in the
State in Ikeja, recently. PHOTO: CHIOMA UMEHA
Concerning NIMR’s effort in the control of MTCT of HIV, Onwujekwe said: “Since we started the treatment on pregnant women, none of them has delivered a HIV positive baby. The only different thing that Cuba has done is signing people for treatment early and making sure they manage them in labour and after delivery; that is all. It is doable, it is not magic. The whole world can achieve it.”
Corroborating, Dr. Oliver Ezechi, the Deputy Director, Research & Consultant Obstetric gynaecologist, NIMR, reasoned, that if all pregnant women in the country can be reached with HIV test, with drugs administered on those found positive, apart from  advising them on what to do, then the babies will come out negative as long as they adhere to instruction.

“Once we can reach a pregnant woman, we go ahead to carry out an HIV test on her. If she is positive, we administer a drug, advice her on what to do; if she follows it, that baby comes out negative. It is doable,” Ezechi said.

He also stressed: “We should also put laws in place, like imprisonment for those that infect others with HIV; knowingly or unknowingly. This is the reason why Cuba is the best country in the world. They have very tight rules and they know the consequences of deliberately exposing a child. If it were in Nigeria, they would go to court to say it is a breach of their fundamental human right.”

Commenting, in an online interview, the United Nations Children’s Fund (UNICEF) HIV Specialist, Dr. Abiola Davies, said this is good news; it means that Elimination of Mother to Child Transmission (EMTCT) of HIV is achievable.

“It means if the appropriate policies and plans are put in place by a committed government, we shall  also see better results in Nigeria,” Davies said, adding that a government-led programme with evidence-based plans at state and LGAs that is fully resourced will enable the country to achieve EMTCT of HIV. However, she regretted that most of HIV programmes are donor driven.

The Director- General, NIMR, Prof. Emmanuel Ujah, observing that Nigeria is a big country with distinct socio cultural differences noted, “It is not going to be easy but we are moving; we are on the right path. After all, NIMR has reduced maternal to child transmission of HIV/AIDS to less than one per cent. In my opinion, we will do well as long as we remain focused. But it would take some time because Nigeria is a very large country.”

This story was published in Newswatch Times on September 24, 2015.

http://www.mynewswatchtimesng.com/hiv-lessons-nigeria-can-learn-from-cuba/
Posted by Chioma Umeha at 00:41