As ‘Merck More Than A Mother’ Campaign Debuts In Nigeria 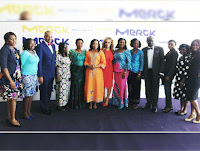 There was serious outrage by many people across the world when the news broke recently over a husband in Kenya who hacked his wife’s hands off with a machete for failing to conceive after seven years of marriage – though he was impotent.

Jackline Mwende was brutally slashed by  her husband, Stephen Ngila, 34,  at her home in Masii, Machakos County after he told her ‘Today is your last day.’

Mwende, 27, was also left with horrific injuries to her head. The case had sparked outrage in Kenya.
Mwende who is now being supported by “Merck More than a Mother” initiative to empower and enable her to become an independent productive member in society throughout the rest of her life represent millions of African women with similar tragedy.

Winifred (not real name) graduate,   married in 2005 at the age of 27, to her seemingly heartthrob in Abuja, Nigeria’s Federal Capital Territory (FCT). She engaged in various forms of petty-trading ranging from selling soft-drinks, ice-blocks, moi-moi among others to support her husband, Tony, an applicant then.

Ten years later, she was subjected to brutalising treatments by her husband for failure to conceive. Tony, who later started working in a blue-chip government parastatal, labelled Winifred all sorts of names, and even accused her of being a witch that eats up the babies in her womb.
Despite medical test confirmation that Tony was infertile, he abandoned Winifred in the hospital after a tumour surgery, married a second wife, fled from their home and moved into a new apartment in an undisclosed area.

Similarly, Agnes Ubani, 29, after eight years of marriage with her husband, Nath, both were based in Enugu state, East of Nigeria, lost almost all her teeth and one eye to  incessant battering from the later because of failure to become pregnant.

There are millions of Nigerian women suffering various forms of abusive for their inability to conceive.  In most cases, it is for no fault of theirs, even when their male partners could be impotent or having other infertility problems.

A recent statistics by the World Health Organisation (WHO) says more than 180 million couples (one in every four couples) in developing countries suffer from primary or secondary infertility. WHO says infertility in Africa is caused by infections in over 85 per cent women compared to 33 per cent worldwide which emphasize the importance of prevention programmes in Africa.

In view of this, the world’s foremost pharmaceutical and chemical company, Merck, has launched the Nigerian version of “Merck More than a Mother,” an initiative aimed at combating infertility and the stigmatization associated with it in the country.

The launch which took place first in Lagos and then in Abuja, brought together women leaders, policy makers, parliamentarians, academics, fertility experts among others to chart the way forward towards combating, identifying and implementing strategies to improve access to effective, safe and regulated fertility care in Nigeria and to define interventions to decrease social suffering arising from infertility and childlessness.

Speaking at the launch, in Lagos, Chief Social Officer, Merck, Dr. Rasha Kelej, said: “Merck More than a Mother” initiative is imperative in Africa as the consequences of infertility are much more dramatic in developing countries and can create more wide ranging social and cultural problems compared to Western societies, particularly for women.

According to Kelej, “A central difficulty associated with infertility is that it can transform from an acute, private distress into a harsh, public stigma with complex and devastating consequences.
“In some cultures, childless women still suffer discrimination, stigma and ostracism. An inability to have a child or to become pregnant can result in being greatly isolated, disinherited or assaulted. This may result in divorce or physical and psychological violence.

“Through the “Merck More than a Mother” initiative, all stakeholders together including women leaders, policy makers, parliamentarians, academia, fertility experts, community and media will challenge the perception of infertile women.”

The Chairman, Senate Committee on Health, Sen. Lanre Tejuosho confirmed: “It’s a fact that out of four Nigerian couples, we have a couple with infertility challenges. This statistics means that infertility needs urgent attention and we need to focus on how we can make health institutions accessible for infertility management.

“Most importantly, there is a lot of stigma against women with infertility challenges in Nigeria. We want to stop it. We also want to increase the advocacy against the notion that it is only women that suffer infertility.

“People must know that 50 per cent of infertility issues are caused by men. We want to let the men to have the courage and also they must come out together with their wives, to seek treatment and to ensure that the focus on women must be directed accordingly, and not a misplaced direction. So, it is more about awareness and education.”

Tejuosho announced: “Currently, there is an introduction in the National Assembly, an Assisted Reproduction Technology Bill, to ensure the law guiding technology of IVF, as well as fertility intervention and surrogacy is well guarded, so that the owner of the sperm or the womb will be the father or mother of the child and not the surrogate mother.”

Tejuosho added that there are also many other laws coming up that will tackle the issues of inheritance for mothers that are childless or have just females as children.

Similarly, infertility advocate and member Kenyan Parliament, Hon. Joyce Lay disclosed that what inspired her to lead the campaign against stigmatising women with infertility issues in Kenya and Africa was because she had a personal experience, having had difficulty having a child after she got married.

Lay said: “I was pregnant at an early stage, and going to give birth in hospitals not equipped resulted to child birth complications for me. Later on, I developed problems with my Fallopian tube and had to undergo surgery. Later on, I had more complications which led to heavy bleedings and closure of my cervix. This led to another surgery of removing my womb.

“I couldn’t carry my child myself, so, when I got the opportunity to get to the Kenyan parliament, I started advocating for education, creation of awareness, prevention and treatment for infections.
“This is because most men and women with infertility issues are caused by untreated infectious diseases.

“So, lack of information, as well as lack of access to better medical and healthcare services contributes largely to cases of infertility in Africa. As a member of parliament, I discover in Africa, governments commit funds in the budget for family planning programmes, but none for infertility.
Also, the mind-engaging discussion at the launch saw as panelists the Chairman, Senate Committee on Health, Sen. Lanre Tejuosho; member, Parliament of Kenya, Hon. Joyce Lay; President, Nigeria Reproductive Society, Dr. Faye Iketubosin; President, Africa Fertility Society (AFS) Professor Oladapo Ashiru and former President, International Federation of Fertility Societies (IFFS) Prof. Joe Simpson.

Meanwhile, as part of its efforts to take the advocacy message across the country, Merck has also partnered with Future Assured, the pet-project of wife of Senate President, Toyin Saraki. Recall that the “Merck More than a Mother” campaign had successfully been launched in Kenya, Uganda, among other sub-Saharan African countries.
Posted by Chioma Umeha at 14:16