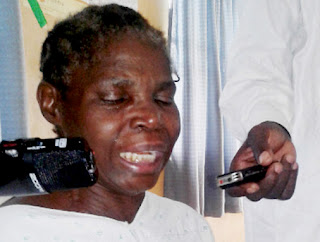 “I came here because my bladder busted when I went to deliver my baby many  years ago and since then  my health  condition has  not remain the same due to pains and discomfort l go through on a daily basis.”

These were the words of  Lucia Ofoegbu, 63, from Anambra  State. Lucia is among the women who were recently treated of Vesico Vagina Fistula (VVF ) at the National Obstetrics Fistula hospital Abakaliki, Ebonyi State.

Lucia said she was thrown out of her matrimonial home, because she came down with VVF, 50 years ago, following a ruptured  bladder. In this story which will bring tears to most eyes, Lucia in an emotion-laden voice, which contrasts with the joy she now feels, told a team of health reporters on a facility visit to the hospital, the first National VVF hospital in the country, that the condition took away her pride.

The facility visit was part of a three-day training for health reporters, sponsored by Engender health, an international non-governmental organization implementing a USAID funded Fistula care project in Nigeria.
According to Lucia: "It happened 50 years ago and I was managing it throughout the period, because I did not know where to go to. I was pregnant of twins – two boys. I laboured for three days, before they took me to Okwuzuuzor, Anambra state. After everything, I lost both babies and came down with Fistula.”

Health workers describe Obstetric Fistula or VVF as a medical condition in which a fistula – hole develops between either the rectum or vagina. When the link is between the rectum and the bladder, it  called is Recto Vagina Fistula  (RVF). They say either of these conditions are caused by obstructed prolonged labour due to childbirth. Medical workers say this is pronounced in situation where access to adequate medical care is not available.

While Lucia’s VVF case appears to be like one of the consequences of early marriage and prolonged labour, there are other examples in the centre at Abakiliki which are problems of having too many children.

Dr. Suleiman Zakariya, Clinical Associate, Fistula Care plus, says  that a labour can be described to be prolonged when it is beyond eight hours. Research has shown that when women have too many children over a short period of time they are exposed to life threatening complications such as fistula during delivery. Zakariya  also  notes   that women who adopted any of the various Family Planning (FP) methods can have as many children as they want with minimal risk.

If only Lucia had known, as she told her story, she could not hold back her tears. Her sullen eyes captured her regrets not knowing of any Family Planning  method earlier. None of her interviewers could control their emotions as Lucia recounted her pains following rejection and humiliation from her husband and in-laws. She said: “A year after, my husband went to the city and came back with another woman and they have been treating me so badly. They threw me out of the house,” she said amidst sobs. Regretting   the  condition , she says  it left her childless without any husband.
“Succour only came when my relatives came to my husband’s house and took me back to my father’s house for rehabilitation.”

Zakariya says some major elements of fistula damage is urinary or faecal incontinence. In addition to these physical problems, VVF and RVF cause acute social problems studies have shown. Due to constant leaking of urine or faeces and the accompanying smell, many communities consider these women outcasts and cut them off from all social activities. Commuting in public transport and engaging in social activities such as weddings and naming ceremonies becomes difficult.

Zakariya says: “If the fistulae are not repaired, their husbands may divorce the women. Some leave their families to roam in the cities where they are not known as the outlook for them remain bleak in the community.” Lucia fits into this gloomy picture. It took the intervention of a Catholic Priest for Lucia to access care and treatment at the National Obstetric fistula centre, Abakiliki, where her dignity has been restored by well-trained surgeons with specialization in fistula repair.

Talking of the priest who directed her to the hospital, Lucia said: “The person that brought me here was a priest. He noticed me because I normally don’t come close to where others are. On one occasion, he called me and said what was the problem and after I narrated my story he was the one that brought me to this place. Now I have been discharged today. I am actually waiting for the Priest to come and take me back. She said since coming down with fisula, the priest is one of the few people she can identify as a relative. “Even all these period I have been here, my husband never asked of me and my co-wife never asked of me. It has been hell for me all these years.”

Lucia story is just one out of the millions of the estimated 150,000 million Nigeria women who for one reason or the other are suffering the condition called, fistula. The health condition has been identified by experts as a silent killer of millions of women of reproductive age worldwide.
In Nigeria, health experts say fistula is now a major public health condition responsible for the growing numbers of maternal and child  mortality, morbidity as well as neonatal death rates.
The centre at Abakiliki, is one of the 13 fistula centres in the country supported by Fistula Care Plus established in  2010, to address the issue which experts describe as a public health crisis.

Dr. Kennneth Ekwedike, Chairman, Medical Advisory Council of the hospital, who was represented by Dr. Yakubu Emmanuel, a Consultant Gyneacologist,  describes  obstetric fistula as one of the various challenges women face in the process of child birth.
Dr. Emmanuel attributed the growing incidence of fistula in the country to poverty. The next is ignorance, he said,  adding that the condition is prevalent among women who have many children over a short period of time.

Commenting on the services of the centre, he notes that over 40 cases of fistula clients have been repaired in the first quarter of the year, which shows a reduction in the number of cases repaired by the same time last year, which is not an indication of decrease in the national average. Jumoke Adekogba, a reproductive health and FP advisor with Engender health also agrees that when women have too many children over a short period of time they are exposed to life threatening complications. Corroborating earlier views, she said: “With family planning women can have as many children as they want without the risks of VVF.”
Also in agreement with this view is, Veronica Nwaoefe, Matron at the Abakaliki Centre, submits that family planning shares a link with fistula, noting that it is a preventive measure against VVF. To her, family planning also helps women who are successfully treated to wait for a while so that they will heal and totally recuperate before planning for another pregnancy.

“When children are properly spaced it ensures the health of the mother and child thereby reducing fistula as a rare event for future generations, ”Nwaoefe adds.
Nigeria has a backlog of between 120,000 to 150,000 fistula cases with an increase of 12,000 new cases occurring annually, according to Fistula Care Plus. However, the numbers of fistula facilities in the country are very few. The project also says the number of qualified doctors who can professionally repair fistula clients are about only 23 with 174 nurses to man the facilities.

The project therefore, stresses the need  for government, the private sector and donors to act together and stop the condition by encouraging family spacing, regular antenatal care and hospital deliveries.
Posted by Chioma Umeha at 09:00