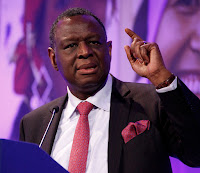 The Network  of Reproductive Health Journalists of Nigeria (NRHJN) has commiseratd  with the Nigerian and global health community on the demise of the Executive Director, United Nations Populations Fund (UNFPA), Professor Babatunde Osotimehin which occurred penultimate Sunday.

NRHJN  which is the foremost  body of journalists  with passion   on Reproductive Health and Rights reporting, described  Prof . Osotimehi's death  as a colossal loss to the global and local health industry.

A statement jointly signed by Mr. Roland Ogbonnaya and Mrs. Yinka Shokunbi, the President and Secretary of  NRHJN respectively,  said, "Until his death, Professor Osotimehin was a pillar of support to our body."

He gave necessary encouragement to NRHJN to remain forthright in the reportage of issues around women and children with special attention on young people, the statement said.

"We recall with nostalgia his unequivocal response to the reproductive health care and needs of the first 21 abducted Chibok Girls who were released in October 2015 during a meeting with our members.

"It was Professor Osotimehin who first broke the news to the media through the NRHJN, that some of the girls were pregnant and pleaded that the rights and dignity of the young school girls should be respected, especially with regards to their choices on what to do with the pregnancy.

Through his office as the Executive Director, UNFPA, customised dignity packs were procured and provided for the healthcare and needs of all the women and girls in all camps for Internally Displaced Persons (IDPs) across the country.

Osotimehin’s immeasurable contributions to promoting the rights and equity of young people all over the world have so far remained unrivalled at the global arena especially as a champion of advocacy in getting family planning commodities to the end users.

On the local arena, late Osotimehin was instrumental to the launch of the Save-One- Million-Lives (SOMIL) Initiative by the Goodluck Jonathan administration in October 2012 and equally got the political commitment of the Federal Government to budget $11.5m for the purchase of essential 13 specific lives saving commodities for women and children in the country.

Professor Osotimehin, until his first appointment as the fourth Executive Director UNFPA from January 2011 to June 2017, was the Health Minister of the Federal Republic of Nigeria between December 17, 2008 and March 17, 2010.He was also the first Director General of the National Agency for Control of AIDS which he transformed from being a committee in the Ministry of Health to a full-fledged Agency.

Prior to the appointments that elevated him into international arena, Professor BabatundeOsotimehin was a former Provost at the prestigious University College Hospital, Ibadan where he had studied Medicine between 1972 and 1978 and then proceeded to the University of Birmingham in 1979 for his doctoral degree in Medicine.He was later named a Professor at the University of Ibadan in 1980 where he became Head of Department of Clinical Pathology.

An erudite Scholar and writer, Osotimehin wrote and co-authored several books.His book, ‘Male Responsibility in Reproductive Health: the reconstruction of Manhood in Nigeria: (1999) Phase 1’, remained one of the best sellers in social sciences till date.

In 2005, Late Professor Osotimehin received the award of the Nigerian National Honour- Officer of the Order of the Niger (OON).

Born on February 6, 1949 in Ijebu-Igbo, Ijebu-North Local Government Area of Ogun State, BabatundeOsotimehin had his first education in his home town before proceeding to Igbobi College Lagos between 1966 and 1971.

He is survived by his wife, Funke whom he met in Ibadan and both had five children and grandchildren.We remain committed to continuing Prof. Osotimehin’s vision for women and young people and his unshakeable stand for reproductive health, human rights and dignity of all particularly the most vulnerable adolescent girls.May his gentle soul rest in peace.
Posted by Chioma Umeha at 12:02