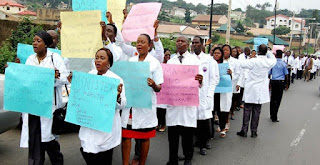 By Chioma Umeha
The Nigerian Medical Association (NMA) has demanded the immediate withdrawal of the threat by the Federal Ministry of Health to employ temporary doctors to replace resident doctors currently on a warning strike.
The association made the demand in a statement jointly signed by its President Prof. Mike Ogirima, and Secretary-General, Dr Yusuf Sununu, and issued in Abuja on Saturday.
Members of National Association of Resident Doctors (NARD) on Wednesday, January 18, began a seven-day strike which is expected to end on Wednesday, January 25.
NMA noted that the government made the threat in a circular issued on Thursday by the Director of Health Services of the Federal Ministry of Health to Chief Medical Directors and Medical Directors of Tertiary Hospitals.
The association emphasised that members of NARD were on strike to enforce their unmet demands which bordered on the poor state of health of Nigerians and the welfare of its members.
It identified the issues as unattractive poor working environments in public hospitals, which was continually weakening the health workforce through brain drain.
NMA noted efforts to distort the harmony among healthcare workers by some individuals within the Federal Ministry of Health which were threatening to completely derail the health system.
The association said NARD was bothered by selective and biased implementation of the contents of various government circulars and agreements with regard to the remuneration of doctors.
It described the alleged distortions as a perfect indication of a lack of political will to end the prolonged crisis in the health sector.
NMA said NARD was also concerned about the delay in bringing out a white paper on the various postgraduate medical training programmes in Nigeria.
“The poor state of our health institutions has not been in doubt as demonstrated by the World Health Organisation ranking the Nigerian Health System as number 187 among 191 countries in 2015.
“The repeated patronage of foreign hospitals by our top government officials and increasing medical tourism to hospitals overseas by well to do Nigerians,’’ NMA noted were among issues of concern to NARD.
The association said that the issues in dispute had already been resolved at meetings mediated by the Honourable Speaker of the House of Representatives, Mr Yakubu Dogara, in 2016.