Dr. Godswill Okara is the President of Assembly of Healthcare Professional Association (AHPA) and the Chairman, Steering Board, West African Postgraduate College of Medical Laboratory Science (WAPCMLS). He spoke to CHIOMA UMEHA recently on the health sector outlook for 2017, asking the Federal Government to honour valid agreements with health unions to ensure programme delivery.

What is your assessment of 2017 budget for health?
Well, though amount budgeted has come down, with a good managerial system in place to effectively manage the little budgeted, we can still make a lot of progress. Many other countries that do not have as much yet because of good management and workable health system, they deliver. A situation where we moved from over 6 percent to now 4.06 per cent in 2017 cannot be a cheering news for anybody.
How has it been in the health sector in 2016?
Professor Isaac Adewole, Minister of Health, has made a lot of progress in trying to get federal and state governments to implement the national health policy. He brought in development partners which earmarked one million dollars for state governments with a promise of more if well utilized. He has also made progress primary health care revitalisation to reduce the burden on secondary and tertiary levels and focus on specialised cases beyond the capacity of the primary health centres.
However, in terms of achieving the set goals and targets both in our national health policy and others agreed with other African governments, it has not been wonderful. For instance, in 2001 African heads of states made a declaration in Abuja that African governments were encouraged to devote a minimum of 15 per cent of their annual budget health matters but only a paltry 6 per cent last year. It is even a little over 4 per cent in 2017.
Some stakeholders have made concerted efforts to prevail on the legislature and the executive to implement all the declarations and targets and earmark resources for their attainment but there seems that not much has been not been achieved in that direction. For example, former President Goodluck Jonathan administration passed the National Health Act (NHA) in since 2016 but to date now, it has not seen the light of the day, giving the impression that we are just paying lip service.
How do you think the inherent industrial unrest would play out in the health sector this year?
There is need for government to honour agreements entered into with the health associations for us to enjoy industrial harmony in 2017. We must imbibe the culture of rule of law and due process. It is wrong for government to enter into collective bargaining with stakeholders in the health sector only to turn around and renege on its promises and commitments. This breeds disharmony, agitations and upheavals in the system.
The government must accept the fact that governance is a continuum. It can’t claim that it would start laying fresh foundation for everything. The foundation had been laid. There were things done that were handed over to the present government. But giving the impression that government is just there to do what it likes, it does not make for good labour relations.
Government should carry along the associations and the unions and give them a sense of belonging by implementing already negotiated agreements. If not all the plans and aspirations of the government in the sector would be dead on arrival.

Where do you think should be focus of the government this 2017?
First, there is need for a change in focus and strategies. It is almost impossible for the Federal Government to intervene in all levels of health care in the country. It should encourage and empower the other tiers of government as enshrined in our constitution.

Is it therefore wrong for the Federal Government to revitalise the PHCs in the country?
Certainly not, but you are also aware that the local governments who ought to drive the primary health care are starved of funds statutorily allocated for them by the constitution of the land and therefore cannot do any meaningful thing. If the local are allowed to access funds allocated to them, they could take care of the PHCs, while the Federal Government could then concentrate on specialized and tertiary health centres. Failure to do that means that we keep on getting the same result and no progress would be made. 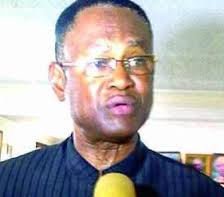 What is your reaction to recent commencement of short vacation by the President, Gen. Muhammadu Buhari’s in the United Kingdomwhich includes medical check?
The news of Mr. President, General Muhammadu Buhari’s short vacation in the United Kingdom is well deserved. It has been a most challenging period of grappling with various flash points and crisis situations both within Nigeria and in the West African sub-region. These challenges must be having a toll on him physically and mentally. He certainly needs the rest this short annual vacation will afford him. Given his military background, he is obviously acquainted with the demands and rigors of the office.
The aspect of undergoing a routine medical check up in the UK during the vacation, for me as a medical laboratory scientist is viewed with mixed feelings. Whereas, it is Mr. President’s right as a person to seek medical attention or any other service whatsoever any where he chooses, I look forward to seeing our healthcare facilities in Nigeria enabled to attract the confidence of and patronage by foreign Presidents and heads of governments. During his tenure as the Executive Chairman of the defunct Petroleum (Special) Trust Fund, I worked under him as a consultant, I am convinced and well aware of his commitment, passion and vision to turn around our tertiary healthcare facilities to global standards. I pray he is able to do it during the tenure of his presidency.