NAFDAC Seals Shops With Fake Liquors, Others In Lagos 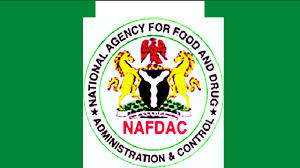 By Chioma Umeha
National Agency for Food and Drugs Administration and Control (NAFDAC) on Friday, raided and sealed shops in the popular Oke-Arin Market, Balogun and Alaba Suru, Apapa both in Lagos State, where fake liquor were being bottled and registered brands counterfeited.
The agency conducted the raid following a tip-off about some wine and spirits distributors, who had local production sites where the adulteration was going on.
Apart from fake liquor, counterfeited packaging materials such as empty bottles, funnels, filtering clothes, corks of registered brands among others, were discovered in the raid which involved NAFDAC Enforcement officers and journalists who monitored the exercise.
A shop at No. 12 Issa Williams, Balogun market with the business name, Ken-Zubby Emporium Ltd, which belongs to one Kennedy Maduewesi, was among those sealed as large quantities of the fake liquor and counterfeited packaging materials were discovered there.
A sales representative at the shop who simply identified himself as Christopher however declined comments on the use of the fake packaging products.
Christopher, who claimed to have been in the shop for less than two years, told Independent, that his master, Mr. Maduewesi, who was not present in the shop at that moment, was the one to provide answers on what those materials are for.
“I am not the owner of the shop, I am only working here as a sales representative, when the owner comes you ask him what they use them for. I met everything here when I came to this shop. They have been here for a very long time,” Christopher told Independent.
The agency also sealed a Fan Milk outfit, Alaba Suru, along Apapa road, where some of their products did not have expected labeling information such as: date markings, batch number, manufacturing date and expiry date.
The outfit also came short of a healthy environment as offensive odour was felt around the outfit.
Commenting on the raid operation, Mr. Uche Chidi Uzoma, Assistant Director, Investigation and Enforcement Directorate, NAFDAC, Lagos said that the operation was actually informed by a kind of international operation that is going on in different parts of the world.
Uzoma said that the raid was part of a global exercise occurring simultaneously in all nations of the world called Operation Olson VI.
He said the operation was jointly conducted by Europol, Interpol and other law enforcement agencies including the Customs, Police, and the Military and was aimed at dislodging criminal network of food and drink products counterfeiters.
“It is aim at dislodging organized criminal network of counterfeiters, those that are into food and drinks products,” Uzoma said.
On the fake products discovered by the team at Oke-Arin Market, he said: “We have confirmed that some of the things discovered at Oke-Arin Market belonging to one Ken-Zubby Emporium Ltd.
“The search operation was based on the tip off we received regarding some of this distributors trying to have a local production site, where adulteration are carried out. In the process, we stumbled on these branded and registered fake wine and spirits; packaging materials, empty bottles, funnels, filtering clothes, corks of some of as we are seeing being displayed here.”
On the Fan Milk outlet he also maintained: “The operation has to do with dislodging of criminal networking involving food fraud, producers, importers, sellers of fake food and drink products.
“Based on that tip off, we equally visited that particular premises and we discovered one or two items not having the expected labeling information that it supposed to bear like date markings, no batch number, no manufacturing date, and no expiry date.
“In such situation you cannot ascertain for the quality, safety and efficacy of such product and unsuspecting consumers are being deceived into taking such product. We actually saw that that environment is unhealthy,” he said.
“We have decided to evacuate and seal the locations. We will continue further investigations even though we already know some of them are counterfeit; from that, we are going to file the cases for prosecution at the court.”
Most of the products found during the raid are contaminated and some of them have contents that shouldn’t be found inside drinks. These have effects on the liver, which can cause liver cirrhosis, cancer, some other unusual situations and also deaths in most cases.