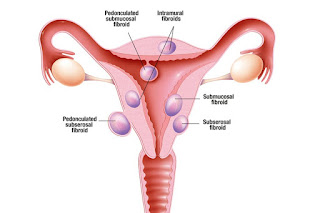 On Pregnancy
•            Fibroids may be associated with infertility
•            They may cause abortion and preterm labour
•            They may prevent a baby from lying properly in the womb (Malpresentation)
•            They may cause obstructed labour
•            They may also cause heavy bleeding after delivery of a baby.
Complications Of Fibroids
•            Pain
•            Bleeding
•            Infection of the fibroid
•            In rare occasions,fibroids can undergo cancerous changes but the incidence of this is less that 0.5 per cent of cases (that is less than 1 in two hundred cases).
Investigations Ultrasound Scan
Most fibroids can be diagonised with this method. But sometimes some fibroids may be difficult to distinguish from ovarian tumours.
MRI (Magnetic Resonance Imaging)
Allows for better differentiation between an ovarian tumour and a fibroid tumour.
Hysteroscopy
Important in assessing the uterine (Womb) cavity for submucous fibroids which can be associated with infertility. This is also particularly a useful procedure in assessing the womb cavity for fibroids prior to Invitrofertilization treatment (IVF).
Treatment
Fibroids should be left alone if they are small and not causing any problems.
Fibroids should be left alone during pregnancy but pain killers may be used for pain.
Some special shrinking injections called LHRH analogues like ZOLADEX can be used in women close to menopause when the fibroids is not enlarging.This special ‘Shrinking’ Injections can be used to also reduce the size of large fibroids before surgery is carried out.
They should however not be used on their own alone since cessation of treatment will result in regrowth of the fibroids.
These shrinking injections should however not be used continuously because of their anti estrogen effect on bone density and skin elasticity. Bone may become brittle and break easily.
Surgery
Fibroids operation (Myomectomy) is indicated :
•            If the fibroids are causing symptoms or are growing rapidly
•            If they are larger than a size 16 week pregnancy
•            If they are likely to complicate a future pregnancy
•            In young women wishing to conserve their fertility but the reoccurrence of the fibroids may be as high as 30 per cent
Myomectomy is also indicated in those women who refuse to undergo hysterectomy( Surgical removal of the womb) even if indicated.
Simultaneous hysterectomy is always a significant risk during the procedure of myomectomy.
Sometimes removal of Submucous fibroids may be indicated using a procedure called hysteroscopic resection of fibroids.
Rupture of a previous myomectomy scar during subsequent pregnancy or labour is a rare possibility and many gynaecologists may prefer not to take the risk of labour but prefer to carry out elective caesarean sections in Pregnancies after fibroids operations.