What Can Make Men Infertile

By  Chioma Umeha
Infertility is the failure of a couple to become pregnant after one year of regular, unprotected intercourse. About a third of infertility problems are due to female infertility, and another third are due to male infertility. In the remaining cases, infertility affects both partners or the cause is unclear.
What is male infertility?
Reproduction (or making a baby) is a simple and natural experience for most couples. However, for some couples it is very difficult to conceive.
A man’s fertility generally relies on the quantity and quality of his sperm. If the number of sperm a man ejaculates is low or if the sperm are of a poor quality, it will be difficult, and sometimes impossible, for him to cause a pregnancy.
Male infertility is diagnosed when, after testing both partners, reproductive problems have been found in the male.
How common is male infertility?
Infertility is a widespread problem. For about one in five infertile couples the problem lies solely in the male partner.
It is estimated that one in 20 men has some kind of fertility problem with low numbers of sperm in his ejaculate. However, only about one in every 100 men has no sperm in his ejaculate.
What are the symptoms of male infertility?
In most cases, there are no obvious signs of infertility. Intercourse, erections and ejaculation will usually happen without difficulty. The quantity and appearance of the ejaculated semen generally appears normal to the naked eye.
Medical tests are needed to find out if a man is infertile. 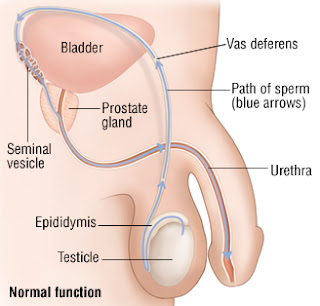 What causes male infertility?
More than 90 per cent of male infertility cases are due to low sperm counts, poor sperm quality, or both. The remaining cases of male infertility can be caused by a range of conditions including anatomical problems, hormonal imbalances, and genetic defects.
Male infertility is usually caused by problems that affect either sperm production or sperm transport. Through medical testing, the doctor may be able to find the cause of the problem.
About two-thirds of infertile men have a problem with making sperm in the testes. Either low numbers of sperm are made and/or the sperm that are made do not work properly.
Sperm transport problems are found in about one in every five infertile men, including men who have had a vasectomy but now wish to have more children. Blockages (often referred to as obstructions) in the tubes leading sperm away from the testes to the penis can cause a complete lack of sperm in the ejaculated semen.
Other less common causes of infertility include: sexual problems that affect whether semen is able to enter the woman’s vagina for fertilisation to take place (one in 100 infertile couples); low levels of hormones made in the pituitary gland that act on the testes (one in 100 infertile men); and sperm antibodies (found in one in 16 infertile men). In most men sperm antibodies will not affect the chance of a pregnancy but in some men sperm antibodies reduce fertility.