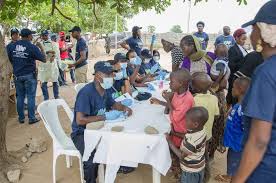 Experts have said that meningococcal meningitis currently ravaging some states in Nigeria requires emergency medical attention as it can kill within hours.
Stating this was Dr Biodun Ogunniyi, consultant epidemiologist for the Nigeria Centre for Disease Control (NCDC) during the just concluded one-day advocacy and sensitisation meeting on meningitis outbreak and response for journalists, organised by Nigeria Centre for Disease Control in Abuja.
In his presentation to journalists at the orientation meeting for journalists on the disease, Dr Ogunniyi said meningitis needs not kill as there’s an effective treatment for it.
The cumulative number of suspected cases recorded in Nigeria throughout the outbreak period was now 9, 646 and 839 deaths from 43 local government areas in 23 states, Dr. John Oladejo, NCDC Incident manager, said at the NCDC orientation meeting with journalists.
He also noted that 257 cases of bacterial meningitis and 171 confirmed cases of Meningitis C were reported during the period.
However, Dr. Oladejo observed that the centre still lacks enough resources to test suspected cases, but thanked the US Centre for Disease Control (CDC) for donating some test kits to the nation recently.
According to World Health Organisation(WHO) Meningococcal meningitis is a bacterial form of meningitis, a serious infection of the thin lining that surrounds the brain and spinal cord.
Meningococcal disease is a serious illness caused by a bacteria. It can cause meningitis, which is an infection of the brain and spinal cord, and it can also cause blood infections. The infection can cause death or lifelong disability.
The common signs and symptoms include, general poor feeling, sudden high fever, severe, persistent headache, neck stiffness, nausea or vomiting, discomfort in bright lights, drowsiness or difficulty awakening and joint pains.