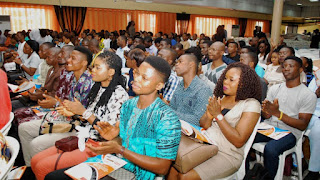 Nigerian Youths have urged the Federal Government to develop a sustainable domestic plan for Vaccine Financing as Gavi, the Vaccine Alliance begins its five-year exit plan from vaccine financing support for the country.
The position was made known recently, at the end of a two-day ‘Routine Immunisation Youth Champions’ retreat organised by Community Health and Research Initiative (CHR) through Partnership for Advocacy in Child and Family Health(PACFaH).
The youths at the end of the retreat commended the recently approved $125m World Bank Loan to finance 2017 Polio Eradication Programme, and other routine immunisation vaccines.
However, they stressed the need for government’s ownership of immunisation financing, without dependence on loans and donors support, according to a statement signed by Ndidi Chukwu, Communications and Media Officer, Community Health and Research Initiative (CHR).
The youths, representing a coalition of CHR-PACFaH CSOs from Bauchi, Kaduna, Kano, Niger among other federal delegates also applauded the Federal Government on the on-going anti-corruption crusade. They however advised that some of the recovered monies should be used to fund pressing health issues in the country, including immunisation and strengthening of Primary Healthcare Centres (PHCs).
The youths also advised the government to increase budgetary allocation to immunisation during the Gavi Transition period to bridge possible immunisation funding gaps in the country, as well as innovative financing through taxes.
Traditional and Religious leaders were urged to effectively use their positions to actively participate in advocacy on immunisation issues to government at all levels, by ensuring community involvement.
On the recently signed ‘Addis Declaration on Immunisation Financing,’ by 54 African Ministers of Health  and African Heads of States at the 70th World Health Assembly, the youths encouraged the government and stakeholders to take responsibility and ensure full implementation of each recommendation, as contained in the Declaration.
The youths who are members of Kaduna State Accountability Mechanism for MNCH (KADMAM), Bauchi State Accountability Mechanism for Maternal, Newborn and Child Health (BASAM), Accountability Mechanism for Maternal Newborn and Child Health in Kano State (AMMKaS), Civil Society on Maternal Newborn and Child Health in Niger State (COMiN), and TrackHealth National Accountability Mechanism (T-NAM), also saw the need for Nigeria to create an immunization trust fund.
The youth coalition trained by CHR-PACFaH to support Immunisation financing advocacy in Nigeria, further stressed that “as youths, the future of our country is now, and every youth must realise that and ensure funding for immunization on Nigerian Children is task that must be done.”
While calling on the government to develop an achievable plan for sustainable immunisation financing, and save Nigeria children the dilemma of dying from preventable causes, and reversal of the achievements recorded so far in immunization.
The economy of every country whose population is vulnerable to diseases can never stand in the committee of nations. Nigeria cannot afford to be left behind.