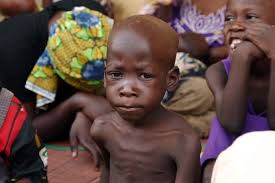 “Inadequate funding is currently hampering our ability to deliver timely and life-saving assistance to people in need. Before this is put in place, there will be no hope and stability in the region,” Egeland said.
Facts:
•Close to 800,000 children under the age of five are suffering from severe acute malnutrition in the Lake Chad region, including 450,000 in Nigeria, 247,500 in Niger, 63,000 in Cameroon and 22,000 in Chad.
•At the same time last year, 475,000 children suffered from severely acute malnutrition in the region.
•In Nigeria, at total of 5.2 million people are food insecure, and 50,000 are already living in famine-like conditions.
•At the Oslo conference for the Lake Chad Basin on 24 February, 14 donors pledged $672 million for Cameroon, Chad, Niger and Nigeria, of which $460 million was for 2017. So far, 84 per cent of this has been disbursed.
•In total there is a need for more than $2.24 billion to meet the urgent humanitarian appeals for the region in 2017. Of this, more than $1.27 billion or about 57 per cent is still lacking.
•Tomorrow,  The Oslo Consultative Group on the Prevention and Stabilization in the Lake Chad region is meeting for the first time in Berlin.