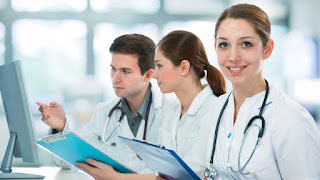 The Joint Health Sector Unions and Assembly of Health Care Professionals and  National Union of Allied Health Professionals(  JOHESU/NUAHP)  has given the Federal Government grace of up to September 30, 2017, within which to meet its demands failure of which it would have no other option than to shut down health care services nationwide.
In a release signed by Comrade Obinna Ogbonna, the National President, and Comrade Obisesan O.A., National Secretary, the union said the ultimatum was expected to elapse on September 12, 2017 but that it extended it to September 30, considering other mobilisation factors and to give the government further room to address their demands.
The demands are as highlighted below are revamping the infrastructure in the tertiary health institutions, report of the inter-ministerial sub-committee on critical matters in the health sector, professional autonomy, headship of departments/units in hospitals and Enhanced Entry Point (EEP) for medical laboratory scientists and radiographers.
Others border on non-payment of backlog of arrears, residency training for other health professionals, appointments of consultants and payment of specialist allowance, Surgeon general, National Health Act implementation, retirement age for teaching hospital staff, abolition of the position on Deputy Chairman Medical Advisory Committee (DCMAC).
The rest are skipping of CONHESSx 10 and payment of arrears in compliance with National Industrial Court of Nigeria (NICN) judgment, adjustment of the CONHESS salary structure, stagnation and nomenclature, AMLSN/BMLS issues in UCH, appointment of other health professionals as consultants and payment of the specialist allowance.
They also demanded for the appointment of CMDs/MDs of tertiary hospitals in accordance with the extant laws, reneging on collectively bargained agreements, call duty allowances for health information managers and dieticians and others, sabbatical leave/annual leave, pension arrears and taxation.
The group further highlighted other discriminatory attitudes by the Federal Ministry of Health and Federal Ministry of Labour and Employment  (FMOH/FML&E), other health care professionals  as part of their grievances.
JOHESU also decried what it described  as wrong and selfish interpretation of Decree 10 of 1985, the law that governs teaching hospitals since 1985 till date and refusal to honour and implement collectively bargained agreement since 2009.
Others grievances are refusal to honour Industrial Arbitration Panel and National Industrial Court Awards/Judgements; introduction of partisan and discriminatory remuneration packages in favour of medical practitioners.
JOHESU also raised the issue of having made NMA members minister since 1999 to date, with myriad of crises.
It strongly canvassed that in appointing a new minister of health, members of allied health professionals should be appointed as the head of the ministry to make for balancing, harmony, social justice, peace and all round development. The Abudullahi Bello Presidential Committee’s report on a harmonious work relationship amongst health workers and professional groups in the health sector in October 2011 had made a similar recommendation.
Others are non-circularisation and implementation of Adjusted CONHESS Salary Structure as done for NMA as well as non-circularisation and implementation of the adjusted CONHESS salary structure as done for NMA counterparts in the same sector.
They urged well-meaning Nigerians, the royal fathers and the press to intervene and prevail on government to implement all agreements and memorandum of understanding reached with NUAHP/JOHESU on or before the expiration of the ultimatum to avert the looming industrial action.
JOHESU had in a letter dated September 5, sought audience with the Dr. Bukola Saraki, President of the Senate on September 13, to seek the intervention of the National Assembly in the protracted demands and agitations between it and the Federal Government.