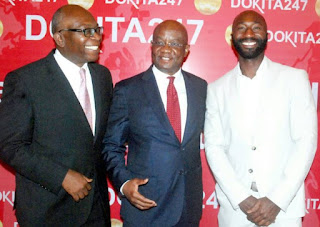 From January 2018, Nigerians will have access to doctors all over the world via a telemedicine mobile app expected to be freely available for all users next year.
Speaking at the launch of the Dokita247.com app at the Oriental Hotel in Lagos on Tuesday, Dr Richard Afonja, the app developer, said the mobile app will reduce medical tourism as well as the number of hours spent at hospitals across the country.
The app, he said, will give also Nigerians access to specialists, who hitherto take weeks and months before they could be seen or reached physically.
According to Dr. Afonja,  the app which can be downloaded on Google Playstore and Apple store, is currently in use in the United States of America but will be available in other African countries later this year.
He added that using the app may extend the lifespan of Nigerians as they can seat in the comfort of their home and office for the consultation, laboratory tests and drug prescriptions.