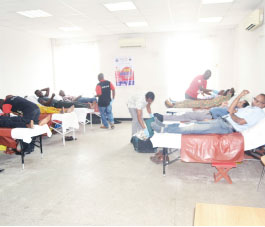 About 436 Kano residents recently, benefitted from a free eye surgery carried out by Rotary Club of Lagos Island, Rotary International in collaboration with the Geeta Ashram Nigeria in Kano.
The exercise, which was conducted under Rotary’s Free Eye Operation Camp, tagged “Vision 2020 – “the right to sight”, recorded mass turnout of people.
Beneficiaries at the just- concluded Camp, called on political office holders and other wealthy Nigerians, to help ameliorate the sufferings of Nigerians with eye- related problems by providing access to free medical screening and treatment.
Two of the beneficiaries,  a 75-year -old Trader, Mrs. Christiana Ogunmola, who received her two eye sight after suffering for over 10 years, as well as a 62 Year Old Business Woman, Mrs. Justina Obi, described blindness as  a shameful disease.
Speaking, an Ophthalmologist from the ECWA Eye Hospital, Dr Ugbede Idakwo who also conducted the surgery along with Dr. Mayor Atima extolled the virtues of the sponsors on their moral, financial  and committment  to the Programme.
He urged Nigerians especially the poor masses, to be conscious of their health, as any neglect of such could result to untimely and instalmental death or blindness.
The duo, pleaded with the Federal government on the need for continued support to  meaningful NGOs to give hope to the hopeless who usually stay away from hospitals due to huge hospital bills.
In their remarks, the Coordinator, Rotary Club of Lagos Island, Chief Anil Gopwani, and a member of the Trustees of Geeta Ashram, Mr Manu Lalwani expressed their  profound appreciation to the medical team of the ECWA Eye Hospital Kano led by the Director of teh hospital, Dr Mayor Atima, and other paramedical staff.
It could be recalled that Geeta Ashram, an NGO started the projects in 2001 to date and subsequently partnered with the Rotary Mega Club of Lagos Island to actualize 2017 project.