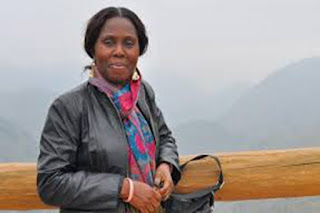 Chioma Umeha
Arabinrin Betty Anyanwu-Akeredolu, wife of the Ondo State governor and the founder of Breast Cancer Association of Nigeria (BRECAN), at the weekend re-stated her commitment to the fight against breast cancer, noting that BRECAN had over the years positioned itself as a leading organisation in Nigeria.
Anyanwu-Akeredolu spoke at the inauguration of Abuja Chapter executive Committee and Investiture which took place at NAF Conference Centre, Abuja, which was organised to mark this year’s World Cancer Day celebration.
She noted that it was timely for every Nigerian to begin to play collective and individual roles in the fight against cancer  by creating awareness both in small and on a large scale among market women, students, among others.
Anyanwu-Akeredolu also used the opportunity to congratulate the newly inaugurated executives noting that with the inauguration of the Abuja Chapter of BRECAN, nothing else best expresses her dedication to the fight against cancer.
She however called for supports from all stakeholders stressing that besides creating awareness, there was need for treatment funding and cancer care centre – a template already adopted in Ondo State to provide help for those who cannot afford the cost of treatment.
Earlier in the week, Anyanwu-Akeredolu took the message of hope to Imo State to raise awareness and campaign against breast cancer.
A town hall meeting which took place at the Imo State University, Owerri, under the chairmanship of renowned Consultant, Rev. Dr. Angelica Anele from the Federal Medical Centre, Owerri, had in attendance Owelle Rochas Okorocha,  the Governor of Imo State; Engr. Eunan O. Eke Okpo I of Umuokpo Autonomous Community, among other eminent personalities.
Anyanwu-Akeredolu in her address while inaugurating the Imo State executive, affirmed her readiness to take the campaign to the 36 states of the federation, noting that no woman in Nigeria should die needlessly of breast cancer.
While charging the newly inaugurated state executive to remain hard working, the founder of BRECAN stressed that it takes great commitment to be a member of the organization whose preoccupation is on charity.
“BRECAN is an association that is involved in giving charity. We are here to help and to expect nothing in return,” she added.
In his remark, the Governor Okorocha thanked Anyanwu-Akeredolu for embarking on such a laudable stride in the fight against breast cancer in Imo State stressing that cancer has become a scourge.
The governor who was ably represented by the Secretary to Imo State Government, George Eche, at the Town Hall on Cancer used the opportunity to thank  the founder of BRECAN for creating awareness in Imo State about the deadly disease.
The event also featured among others, lectures on causes of cancer, fundraising, clinical breast examination and the investiture of the executive of the Imo State chapter of BRECAN.