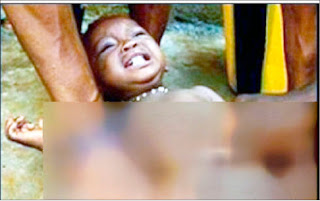 Not a few keen observers of the health sector are worried that Nigeria is home to millions of those who survived female genital mutilation (FGM). More worrisome is the high level of ignorance concerning the practice of FGM.
Nigeria is among four countries where two thirds of all women who have undergone FGM/C live; the other three countries are Egypt, Ethiopia, and Sudan.
Most recent estimates from UNFPA-UNICEF Joint Programme On FGM/C Abandonment: Accelerating Change Phase II report from 2014 to 2017  show that Nigeria has zero to 28 per cent  prevalence along with Yemen.
The World Health Organisation (WHO) reports that Female genital mutilation include all procedures which involve partial or total removal of the  external female genitalia or injury to the female genital organs, whether for cultural or any other  non-therapeutic reasons.
The world health body further classifies FGM into four major types, namely; Type I (Clitoridectomy), Type II (Excision), Type III  (Infibulation) and Type  IV.
The United Nations (UN) health body in its 2018 reported that young girls between zero and 15 years even women are subjected to female genital mutilation in worldwide.
Of the 200 million girls and women globally living with the consequences of FGM, 44 million are aged less than 15 years, the report further said.
According to the report, three million girls are at risk of the practice every year.
In 2016, UNICEF estimated that at least 200 million women and girls in 30 countries have been subjected to FGM.
While earlier focus in Nigeria has generally been on three major types of FGM/C practiced -Type  I, Type II, and Type III – recent evidence show s that different forms of Type IV are as prevalent as  the other  types, especially in the northern regions, where little attention  has been  paid  over the  years.
The procedures for FGM can take place anytime from a few days after a child’s birth to a few days after a woman’s death.
Although FGM/C is known to be widespread in Nigeria and is an important issue in international discourse, nationally representative data on its prevalence in Nigeria is comparatively rare.
Speaking during two-day review meeting with media – radio –  partners on ending FGM in Nigeria which was organised by National Orientation Agency (NOA), Oyo State with support from UNICEF, Benjamin Mbakwem, FGM/C Consultant for Ebonyi & Imo State, UNICEF Enugu Field Office, said it is an out-dated practice and tradition that threatening the rights of girls and women to development, protection and ultimately survival.
This is an unbridled contravention of the international Child Rights Act adopted by Nigeria in 2003 to domesticate the convention on the Rights of the child. Despite the fact that some states have passed it into law, it is still a daunting task fighting FGM/C in the Southwest, Mbakwem said.
According to WHO, the practice of FGM enables the victims to be automatically open to various risks which may be immediate, long term, psychological, sexual functioning, or obstetric.  The immediate risks the victims are exposed to include: excessive bleeding, pain, shock, genital tissue swelling, infections, wound healing problems, as well as death. The victims are still exposed to long term risks which may include: genital tissue damage, vaginal discharge and itching, menstrual problems, chronic genital infections, reproductive tract infections, urinary tract infections, keloids and cyst.
These victims are not exempted from the risks in childbirth which may include: prolonged labour, post-partum haemorrhage, still birth and early neonatal death, caesarean section, extended maternal stay, episiotomy, etc.
Apart from the physical risks the victims are exposed to, they can also be affected psychologically. They can be depressed, have anxiety disorder, or post traumatic stress disorder (PTSD)
UNJP On FGM Elimination: Alignment with SDGs, UNFPA and UNICEF’s Strategic Plan Outcome Areas.
UNFPA/UNICEF  global  target  and  call  to  eliminate  FGM/C  by  2030,  an  understanding  of  prevalence,  trends,  and legal frameworks  in Nigeria  is a critical first step in designing  policy and programme interventions.
SDG Goal 5, Target 5.3: “Eliminate all harmful practices, such as child, early and forced marriage, and female genital mutilation.”
UNFPA Strategic Plan 2018-2021 Outcome 3: “Gender equality, the empowerment of all women and girls, and reproductive rights are advanced in development and humanitarian settings” and Output 12: “Strengthened response to eliminate harmful practices, including child, early and forced marriage, female genital mutilation and son preference.”
UNICEF Strategic Plan 2018-2021 Goal 3: “Every child is protected from violence, exploitation and harmful practices” and Result 2 “By 2021, girls are reached with UNICEF-supported multisectoral at-scale programmes to address harmful practices, namely [female genital mutilation] and child marriage.”
The Joint Programme will focus its interventions in Phase III on the 16 countries listed above (Slide 5), as a way to maximise resources and bring the international community closer to achieving SDG Target 5.3.
In Nigeria the intervention will also continue in the five States (Ekiti, Ebonyi, Imo, Oyo and Osun), while further studies will e conducted to ascertain the emergency of new FGM Hotspot States in Nigeria.
UNFPA/UNICEF will discuss government on the best way to conduct the intervention at the community level to avoid duplication.