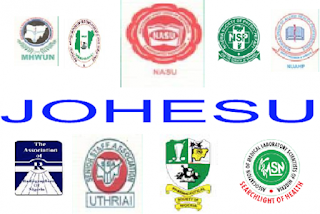 ts on Inter-Professional Relationships In the Public Health Sector, saying that it was not in tune with national development and public interest, CHIOMA UMEHA writes.

The Joint Health Sector Union (JOHESU) and Assembly of Healthcare Professional Association (AHPA), a body that constitutes about 95 percent of the workforce in the health sector, has rejected the report of the Yayale Ahmed Presidential Committee of Experts on Professional Relationships in the Public Health Sector submitted to former President Goodluck Jonathan in December 2014.
JOHESU and AHPA in a letter to President Muhammadu Buhari said it was rejecting the report because the Nigerian Medical Association (NMA) infiltrated the Secretariat of the Committee through the instrumentality of its privileged members in high places in government.
The letter read,  “Your Excellency, we the under listed stakeholders in health find it necessary to inform the Federal Government that we reject outright the very biased and one-sided Yayale Ahmed Presidential Committee of Experts on Professional Relationships in the Public Health Sector in both public and professional interests.
“From all intents and purposes, the report only seeks to further marginalise our members and compromises the future of generations of our members who would be permanently made subservient to their contemporaries in medicine.
“ We strongly demand this report which is not in tune with national development and interest be immediately withdrawn for the public good and the future of the Health Sector as it is certainly not a positive reference point in the quest for international best practices,” it said.
The rejection letter was jointly signed by Com. (Dr.) G.C. Okara, President AHPA; Com. Christ Ani, National President, NASU; Com. Peters Adeyemi, General Secretary, NASU; Com. (Dr.) Ogbonna O.C., National President, NUAHP; Com. Obisesan O.A., General Secretary, NUAHP; and Com. (Dr.) B.A. Akintola, President, SSAUTHRIAI.
Others who signed the letter are Com. Akinade M.O., General Secretary, SSAUTHRIAI; Com. Adeniji  A.A., National President, NANNM; Com. Shettima Thomas A., Secretary-General, NANNM; Com. Biobelemoye Joy Josiah, National President, MHWUN; and Com. Silas G. Adamu, Secretary-General, MHWUN.

“After a very critical evaluation of the Yayale Ahmed Presidential Committee of Experts on Professional Relationships in the Public Health Sector (YAPCEPRPH) report, we wish to draw your attention to our intendment to continue to dissociate our respective organisations from the less than credible posturing of the committee report on fundamental practice issues,” the letter further read.
Such issues include establishment of the office of Chief Medical Adviser to the President; Creation of a National Healthcare Commission; Matters arising from Teaching Hospital Act; Headship of Teaching Hospitals and Appointment of CMAC; Appointment of Deputy CMAC.
Others are, Consultancy Cadre for Eligible Health Professionals; Composition of Boards of Management for Federal Health Institutions and Opposition to Appointment of Other Health Professionals As Directors in Federal Health Institutions
The rest are, establishment of Post-Graduate Colleges for ‘Allied Health Professionals’ and Obvious Bias Against Health Professionals other than Doctors Especially in the Reflected Areas.
Other areas of their discontentment are the position of the panel on Pharm D and O.D. Programmes, withdrawal of Central Bank of Nigeria Circular authorising MLSCN to approve a licence for the importation of IVDs and poor hazard, call-duty and related allowances to health professionals.
On the establishment of the office of Chief Medical Adviser to the President, the body said one of the most nauseating recommendations of the Yayale Ahmed Presidential Committee was the establishment of an unnecessary office of Chief of Medical Adviser to Mr President. It said that the functions of the office confirm that the recommendation is only a shortcut to bring back to life the concept of Surgeon-General as demanded by the Nigerian Medical Association (NMA).
It said the committee found it necessary to cite experiences in climes where doctors have a monopoly of some public health initiatives but conveniently and cleverly avoided the United States of America experience of the Surgeon-General, which is open to all health professionals.
JOHESU/AHPA drew the attention of Mr. President to the sixth National Assembly and the 2014 National Conference whose legislative templates have all rejected the concept of Surgeon-General or any of its epitome.
“For the umpteenth time, we restate with necessary emphasis that a country whose public sector wage profile had increased by a whopping 100 percent from N890 billion to N1.83 trillion in five-year period between 2009 and 2014 should not be contemplating setting up fresh bureaucracies especially when it is unnecessary to satisfy ego trips,” it said.
JOHESU/AHPA also criticised the creation of a National Healthcare Commission to replace professional regulatory agencies and to regulate tertiary health facilities. It noted that the Presidential Committee proposed a template for the age-long desire of the Nigerian Medical Association (NMA) and its appendages to have a shortcut to regulate and control all the cadres of health professions in Nigeria.

“Your Excellency, the recently approved National Health Act is acceptable to JOHESU and Assembly of Healthcare Professional Association (AHPA) only when the necessary safeguard to protect the autonomy of all health professions is inculcated into Section 1(1) of the National Health Act.
“That safeguard is the clause that declares that regulation of health services in Section 1(1) of the new Health Act is without prejudice to existing health laws. We find it expedient to lament very loudly that this particular recommendation is clearly out of line and a design to institutionalise confusion. In terms of logistics, how can one Commission as proposed take over the functions of 15 different professional regulatory councils as well as regulate the activities of 55 Federal Health Institutions as currently constituted?”
It described as irrational logic, the committee’s ill-conceived concept of a Healthcare Commission to replace 15 regulatory agencies that are products of valid Acts of Parliament as Section 315 of the Constitution conveys validity on those laws that were creations of the military.
On matters arising from Teaching Hospital Act, the body also said the Committee did not reckon with holistic appraisals of the contentious matters under the Act.  It said that existing legislation on Headship of Teaching Hospitals provide that medically qualified persons can be appointed as Heads of Federal Health institutions in Nigeria.
“Over time the Federal Government in conjunction with Nigerian Medical Association (NMA) has interpreted this to imply that only Doctors meet this eligibility clause. Rather craftily, the Yayale Ahmed Presidential Committee relied on the ancient perception known to only our clime that doctors are the sole cadre of staff who are medically qualified and so should continue to head Federal Health Institutions. There are a number of suits where stakeholders are currently seeking an interpretation of who is medically qualified. While awaiting the outcome of these suits including those on appeal, we can safely inform the Federal Government that it is less than fashionable to legislate that a doctor heads a hospital in the global arena,” it added.
It contended that the condition precedent to be CEO, therefore, must revolve around interested persons being seasoned administrators or managers of cognate experience.
On the appointment of Chairman, Medical Advisory Committee (CMAC), it said there was a need to open borders of restriction associated with the responsibility to any of the staff (HOD level) in the clinical services department, which includes Pharmacy, Nursing, Medical Laboratory Sciences, Radiography, Physiotherapy and others.
For the appointment of Deputy Chairman, Medical Advisory Committee (D-CMAC), it said the Yayale Ahmed Presidential Committee, unfortunately, sees no reason why doctors cannot continue to grab unilaterally all privileges in health care contrary to evolving norms in the global arena.
For Consultancy Cadre for eligible health professionals, it said the only reference to it were admonitions to invoke the spirit of the NICN judgment which gave the Federal Ministry of Health powers to approve the cadre. It wondered why the Federal Ministry of Health has not come up with necessary circular prescribing conditionalities to appoint new eligible health professionals since the judgment re-instated existing consultant in the various professional cadres.
On composition of boards for Federal Health Institutions, the body said the cosmetic recommendation of increasing the number of health professionals on the Board of Management of Federal Health Institutions does not fundamentally redress the lopsidedness in board composition as the adjustment just improves the ratio of doctors to other professionals on the board from ratio 1:8 to 1:3 which is still inequitable. It said the way forward is to allow for an amendment of the Teaching Hospital Act to redress permanently the issues in public interest.
Among other issues, JOHESU/AHPA said, “From the major highlights, we have documented in this memo Your Excellency, the Yayale Ahmed Presidential Committee has failed to enlist our confidence in major areas of its report.”