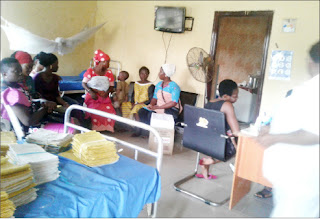 Nigeria population is estimated to be over 200 million, while the Lagos State figure put at over 21 million as at 2016 by the National Population Commission of Nigeria (NPopC).

It is no surprise therefore that there is increasing family planning campaigns in Lagos states to tackle envisaged overpopulation and its consequence.

Research shows that the socio-economic infrastructure of any state is often over-stretched if families are not planned, more so in a country struggling with inflation and economic depression.

One of the main economic problems for any country with an overpopulation problem is the shortage of food, minerals, fuel and other resources.

As a means of ensuring effective population control, the global community has set a target that by 2020; more women and girls around the globe would be able to plan their families and their future with the help of Family Planning programmes.

Obviously acting in sync with this global commitment, Nigeria also set a target that by that 2020, its Contraceptive Prevalence Rate (CPR) would increase from 15 per cent to 27 per cent.

The CPR which is ‘the percentage of women of reproductive age who are currently using, or whose sexual partner is currently using, at least one contraceptive method, regardless of the method used’, is often reported for women aged 15 to 49 who are married or in a union.

With daily influx of people and families into Lagos, the state projects to achieve the global target of Family Planning by year 2020.

Indeed, to achieve the 27 per cent target, state governments also gave themselves target and Lagos state made a commitment to increasing its CPR to 74 per cent by 2020.

But with 2020 around the corner, findings by DAILY INDEPENDENT show that family planning is gaining fresh acceptance by women in the state though the CPR is drastically reducing despite concerted efforts by the government.

Survey conducted by the Performance Monitoring and Accountability (PMA2020), also identified that CPR in the state has drastically reduced in recent time. Experts however, have blamed this to unavailability of sufficient consumables to effectively carry out procedures, noting this is a major barrier to FP uptake in the state.

Some mothers who spoke with DAILY INDEPENDENT confirmed that the issue surrounding the low FP uptake in Lagos state has nothing to do with the commodities.
The mothers spoke to DAILY INDEPENDENT at a recent field trip to some Primary Healthcare Centres (PHC) in Lagos organised recently, by Pathfinders International.

They also said, the commodities are safe and free in the public health facilities and the government is committed to ensuring that the provision of free FP services to the entire women and men of child bearing ages in the state as its paramount agenda.

In line with the pro-activeness of the Lagos government, the state emerged one of the very first in the federation to create a separate budget line for FP. This followed the state’s recognition of the essential role family planning service plays in the reduction of maternal and child mortality and morbidity rates.

Family planning as a human right
Family planning is the practice of controlling the number of children one has and the intervals between their births, particularly by means of contraception or voluntary sterilisation.

This year’s World Population Day (WPD) theme is, “Family Planning As A Human Right.” However, the United Nations Human Rights Office of the High Commissioner defined human rights, as “rights inherent to all human beings, whatever our nationality, place of residence, sex, national or ethnic origin, colour, religion, language, or any other status. We are all equally entitled to our human rights without discrimination. These rights are all interrelated, interdependent and indivisible.

The theme of this year’s WPD examines the importance of the right of every person of reproductive age to decide and voluntarily access quality FP and child birth spacing information as well as services.

The right to family planning, therefore, permits the enjoyment of other rights, including the rights to health, education, and the achievement of a life with dignity.

An informed rights-based approach to family planning is the most cost-effective intervention for tackling maternal death and illnesses.

Many Lagos mothers who spoke to DAILY INDEPENDENT at a recent field trip now see the family planning as their human rights just as they are enjoying the support of their spouses in using the services.

Narrating her story, Mrs. Oluwaseyi Oluwaseun, a teacher, who have been on family planning since December 2012, confided in DAILY INDEPENDENT that she has evidently seen the benefit on herself and her children.

“My last baby was born seven years ago. He will be seven by this year September,” she said excitedly. She further acknowledged the support and consent of her husband, pointing out that obtaining permission from work is the only obstacle in keeping to appointment dates as at when due.

According to her, one of the major benefits of family planning is that the method has helped her to keep fit and looking like ‘under sixteen.’

At 32, Mrs. Karim Bilikis, told DAILY INDEPENDENT that family planning is very good and has enabled her to have peace in the home. She said, “It allows you to have peace at home, and take care of children up to university level.”

According to her, it helps women or mothers to have time to improve on their education. She noted that she is on two months family planning, which she started using after her first child.

Bilikis said there is no side-effects unless one misses medical appointment, adding that family planning for her is a chance to have happy family and help my husband. Bilikis revealed that she planned to have just three children, stressing that she sees family planning as a human right.

“Family planning is a woman’s right. Women have very important work to do at home, including, exclusive breastfeeding and catering for the home. Through family planning, she can carry out all her duties very well,” she said.

Abiola as a trained nurse said that the barrier to the use of family planning commodities in Lagos State is the issue of consumables which according to her scares the women away even as she pleads with the government to make consumables available.
For instance, Mrs. Mojusola Oluwasegun, 30, told DAILY INDEPENDENT that she likes family planning, so does her husband.

She further disclosed that she insisted on choosing family planning herself, obviously in fulfillment of her human rights after making a choice of implant.

Observing that the first time she used FP, she was allegedly told her system will change, but today she has found out the truth.

A staff Nurse, who refused name to be mentioned, at the Primary Healthcare Centre (PHC), Mascara in Alapere, Ikosi, Agoyi-Ketu, Lagos, confirmed that they encourage married women to choose a plan after due counselling. Mothers, she said choose a plan themselves, adding that however, when there are complaints mainly on menses flowing too much and some weight loss, or adding of weight. Describing most of the complaints, especially on the weight as “psychological issues”, while those who have excess bleeding issues are placed on medication.

At the Primary Healthcare Centre (PHC) Ogudu, Mrs. Florence Famakinwa, 34, told DAILY INDEPENDENT that she started family planning since 2012, but removed it to have a second baby.

“I stopped family planning to have my second child. After my second child, I decided to use IUD and my husband supported me very well.” She noted that she experienced no side effect since she started this one. She added that the benefit of child spacing is very important and cannot be over-emphasised.

Also, a teacher, Mrs. Akerele Deborah, told DAILY INDEPENDENT that she started family planning in 2004 following a visit to a PHC after her fourth child.

According to her, she informed her husband and an earlier 10-year plan and is now placed on a five-year plan.

She said, “There was no complaint from my spouse. It’s a great benefit and I really thank the matron that introduced me to family planning.”

The use of barrier methods includes procedures of birth control: spermicide, condom, sponge, diaphragm, and cervical cap. While hormonal consists of use of contraception for birth control methods that prevent eggs from being released from the ovaries, thicken cervical mucus to prevent sperm from entering the uterus, and thin the lining of the uterus to prevent implantation.

IUDs involve use of a tiny device insertable into uterus to prevent pregnancy. It’s long-term, reversible, and one of the most effective birth control methods out there. There are natural methods including withdrawal techniques.