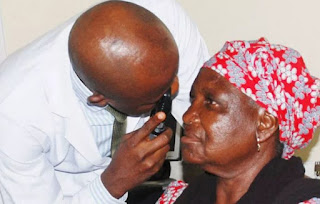 (NAN) The Ophthalmological Society of Nigeria (OSN) says it will conduct free cataract surgeries worth over N20 million on no fewer than 250 less privileged people in the country.
Dr Sunday Abu, the Chairman of Eye Camp and Surgery Committee of the society, disclosed this in an interview with the News Agency of Nigeria (NAN) on Friday in Abuja.
Abu said that the exercise was part of the society’s corporate social responsibilities.
“The average cost of one cataract operation is N80, 000 and the 250 eye surgeries will cost about N20 million if we are to cost them but we are not spending money.
“We are not spending money because consumables are donated by Sight-savers, an International NGO while we have experts volunteering their services for the success of the surgeries,” Abu said.
Cataract is a clouding of the lens in the eye which leads to a decrease in vision.
Some of the symptoms include faded colours of the eye, blurry vision, halos around light, trouble with bright lights and trouble seeing at night.
Abu said that 150 surgeries were billed to be conducted at the University of Abuja Teaching Hospital, (UATH), Gwagwalada while 100 would be performed at Kubwa General Hospitals.
He said that the surgeries in Gwagwalada would be conducted from Aug. 25 to 28 while those in Kubwa were scheduled for Aug. 27 and 28.
According to him, the exercise was specifically targeted at the very poor in the society that could not afford such services.
“We will commence eye screening in Kubwa hospital on Aug. 23 and 24 while the surgery will start on Monday 27, and last till Tuesday, 28.
“Screening is already ongoing in Gwagwala hospital; so people can walk in there and have their eyes screened,” he said.
The ophthalmologist further said the exercise was part of OSN’s annual pre-conference activities adding that it was geared toward  reducing avoidable blindness to the barest minimum.
Abu who described cataract as the commonest cause of blindness in Nigeria and the entire African continent said it could be treated through surgery when diagnosed early.
He however advised people who are 40 years and above to make it a priority to check their eyes regularly.
According to him, a lot of people get blind due to cataract and other eye diseases as a result of ignorance of having such challenge.
He further urged those with poor vision or other eye ailments to avail themselves of the free eye screening and surgery in order to address their challenges.
“We advise people from age 40 and above to have their eyes checked on time and at regular basis to ascertain if there is any eye challenge.
“This is because there are some silent eye diseases such as glaucoma that do not give any sign or symptoms.
“This can only be detected when your eyes are screened by experts,” he added. (NAN)