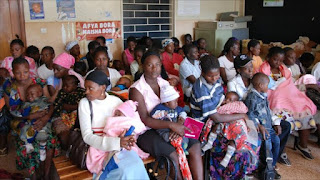 By Chioma Umeha
“It was a Monday. I started working early; I cleaned my salon and washed all the towels. When I finished I went to Randle Health Centre and picked up two pregnancy tests.
“I honestly didn’t think I was pregnant, but wanted to put my mind at ease. I remember seeing the two lines show up and I burst into tears. This couldn’t be happening. Quickly, I visited my childhood friend, Adegoke at Apapa Road, Ebute Metta.  She accompanied me to another Lab, close to Oyibo Market. There, I took another one. Positive! I was pregnant.”
This is the story of Mojisola, (not real name) a 37-year-old lady, hair dresser and secondary school leaver.
Moji as she is fondly called by acquaintances spoke exclusively to DAILY INDEPENDENT during an investigative tour of Otumara Community, Apapa area of Lagos.
Palpable pains and regrets were still noticeable from her expression as she continued her narrative concerning who was responsible for the pregnancy.
She said, “I was raped by some miscreants on my way to my house after work one Saturday. Hardly, did I expect that pregnancy as I was not ovulating at that time. So I did not want the pregnancy.
“I was 30 at that time. I continued to sob bitterly. Adegoke was trying to make me calm. She promised to help me terminate the pregnancy. She took me to a Chemist somewhere on Apapa Road.
“All I still remember is that the chemist took a needle filled with improvised explosives and inserted it into my uterus.  She further gave me an herbal potion to drink to flush my uterus. Since I got married, I have been struggling to have a child.”
But, this deeply hidden secret later became a public spectacle she bled profusely and was at death’s door. When she next woke up after the ugly exercise, Moji told DAILY INDEPENDENT that she found herself at the Lagos University Teaching Hospital  (LUTH), Idiaraba on a drip, breathing from an oxygen mask and running low on blood.
Doctors told her she was lucky to be alive. But, her uterus was removed after it became ruptured. Today, she is struggling with infertility.
These are just some of the things that girls and women turn to – 25 million times a year – in a desperate attempt to end their unintended pregnancies. Some live to tell their stories. Many others do not.
Counterfeit drugs, quack doctors, tea-leaves, knitting needles, even small bottles filled with improvised explosives are inserted into the uterus. Unsafe abortion is a major contributor to maternal mortality.
Today, unsafe abortions account for up to 11 per cent of global maternal deaths.  A report by Marie Stopes International states, “The problem is particularly acute in the developing world. Across the different regions where we work an estimated five women die every hour as a result of unsafe abortion, and around the world around eight million more women suffer serious complications.”
And these numbers are likely to rise following the re-introduction of the Mexico City Policy – a Republican policy that blocks US Government funding to non-US organisations that perform abortion with their own funding, according to health industry analysts.
Many health industry watchers are seriously worried that this policy is at the moment negatively impacting on women’s health and their opportunities for the future,
They have condemned the policy which blocks funding to the world’s largest providers of modern contraception, stressing that it is counter-productive.
Analysts are worried that the policy has reduced women’s ability to prevent unplanned pregnancies while the number of women undergoing unsafe abortion has increased.
This is because of the stigma and misinformation that still surround the procedure. Even in countries where abortion has been legal for decades, abortion often remains a controversial subject with those against the procedure giving political, moral, social, ethical and religious reasons.
In Nigeria, abortion is legal only when performed to save a woman’s life. Still, abortions are common, and most are unsafe because they are done clandestinely by both skilled and unskilled providers.
The long-term impact of the ‘global gag rule’ has become very visible as family planning providers project that approximately two million women would be denied sexual and reproductive health services as a result of the order reinstated sometime last year.
Family planning and global health experts warn that the full consequences would continue to unfold.
Marie Stopes International (MSI) which provides contraception and abortion services in 33 developing countries has calculated it faces an $80 million funding gap as a result of the decision, which slashed 17 per cent of its donor income.
MSI has already closed some services in these countries.
Under the expanded version of the “global gag rule” introduced by President Donald Trump soon after his inauguration in January 2017, foreign NGOs that receive any United States global health assistance are prohibited from performing or promoting ‘abortion as a method of family planning.’ That includes offering legal advice or counseling related to abortion.