WARIF Educates Boys On Sexual Based Violence Through New Initiative 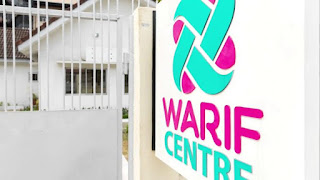 Women at Risk International Foundation (WARIF), a non-profit organization established to prevent and intervene on the prevalence of sexual violence/rape, has announced results from the first session of its new initiative called the WARIF Boys Conversation Cafe. This initiative is designed to educate young boys between the ages of 12-16, on the prevalence of sexual violence in Nigeria, to change perception and behavioral pattern that exist amongst these group of boys, on violence against women.
The WARIF Boys Conversation Café took informal dialogue sessions with cohort groups of secondary school boys, where vetted male volunteers were recruited from different organizations to serve as mentors /role models at these café sessions.
At the end of first session with students of Surulere secondary school, the WARIF Boys Conversation Café, recorded an outstanding outcome with 98% of the beneficiaries strongly agreeing to take a stand in any case of sexual abuse rather than just be bystanders. 85% of the boys strongly agreed that CONSENT of a girl to have sex is important and should be respected. Further results of the project also showed that the use of banned drugs like Tramadol and Codeine dropped by a whopping 66%.
Dr. DaSilva- Ibru, Founder of WARIF, speaking about the initiative said “On the issue of gender based violence in Nigeria, there are no existing curriculums in schools that directly address these topics for boys.
A lot of attention is given to women and girls to protect themselves against sexual abuse as opposed to teaching boys and men not to become perpetrators of sexual violence. With the introduction of this initiative, we intend to change the existing attitudes and behavior of young boys on the topic of rape and sexual violence.  Through mentoring and education, we can change the narrative of these young men who will then grow up to become productive members of their communities”
The goal for us at WARIF is to reduce sexual based violence related issues and it is important to involve the boys in this process. Ultimately, we want a society where better boys are raised and become men who understand that sexual violence is an issue that we must all fight against”
Commenting further about the Boys’ Conversation Café, Mrs. Lola Vivour Adeniyi, Coordinator of Domestic and Sexual Violence Response Team Lagos (DSVRT) said “At DSVRT we believe strongly in positive masculinity. We found that unconsciously, we put a lot of awareness on girls and how we can protect them, teaching them how to be safe, and how they can protect themselves from sexual abuse. But we usually leave the boys behind, which should not be the case, as statistics have shown that it is mostly boys who grow to be perpetrators of abuse, and they also get sexually abused too.
So, we are excited about the WARIF Boys’ Conversation Café, and we will be partnering with WARIF to cascade these café conversations across the 6 education districts in Lagos. ” she added.
WARIF is also encouraging a call to action for everyone to raise their voices against rape and sexual violence of young girls and women in Nigeria and Africa. Parents should ensure that they teach their sons about sexual behavior, and the importance of controlling sexual impulses.
WARIF has also introduced several initiatives such as the WARIF Centre, WARIF Educational School program, WARIF Know your community, WARIF Gatekeepers initiative and the WARIF through the Arts initiative.