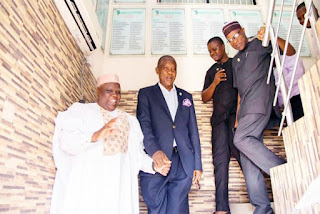 Lagos – Mazi Sam Ohuabunwa, the new President, Pharmaceutical Society of Nigeria (PSN), has raised the alarm that Nigeria is facing an unmitigated incidence of drug misuse and abuse causing untold morbidities and mortalities.
Ohuabunwa gave the alarm  during a courtesy visit on the Prof. Isaac Adewole, Minister of Health, in his office noting that interlopers, whom he described as merchants of death  have penetrated the  pharmaceutical industry  and daily sending innocent Nigerians to their early graves.
According to the new PSN boss, the duties of pharmacists have been grossly usurped that the average Nigerian can obtain medicines from anywhere in the open market -stalls, kiosks, intra and inter-city buses and now in night clubs and bars.
He said that the association will collaborate withthe Minister to tackle in the gross misuse and abuse of drugs by strengthening the control of medicines, empowering pharmacists to play their critical role as custodians of medicines.
According to him, it is only when this is achieved that you can hold pharmacists accountable for every tablet or capsule or vial of injections produced in the country or imported.
This disorderly medicine supply system in our country must be repaired for the good of all, he added.
Ohuabunwa seized the opportunity to present a list of challenges facing the pharmaceutical industry, while he sought the timely intervention of the minister to the issues.
Some of them are; full implementation of the National Drug Distribution guidelines (NDDG), reconstitution of the Pharmacist’s Council of Nigeria (PCN), placement of pharmacists in boards of teaching hospitals/ federal medical centres, and harmony in the health sector.
The PSN President also sought support for local value addition saying, they must fight for National Health Policy to include the provision of 70 per cent of our essential drug needs from local manufacturing.
Worried, he said, “Today, we are producing less than 30 per cent. And even within this poor 30 per cent, only about five per cent is true local input into local manufacturing.
“Most of the raw materials which include: excipients, flavourings, additives are all imported. There is no Active Pharmaceutical Ingredient (API) produced anywhere in Nigeria. Our next door neighbour, Ghana does.”
He urged research centres especially, NIPRD to help in the production of local alternatives for the industry and ensure that locally produced drugs and medicaments are given priory in procurement by the public sector across the nation.
Responding, Prof Adewole said health is not the sole responsibility of the federal government but regretted that states are not helping issue.
After the, the crack down on substances prone to abuse could continue with alcohol.
Prof. Adewole, said that alcohol was a problem noting that the sale of alcohol has moved from “bottle to sachets,” many containing as much as 50 per cent  alcohol by volume despite the Federal Government’s ban on cough syrups with codeine.

“Next ban is going to be on alcohol,” he said during  the PSN visit in Abuja.